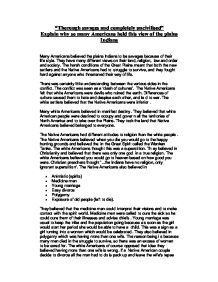 Why did the Americans think Indians were savages?

Native Americans had totally different views on land than the white Americans did. The Native Americans respected land as it was there mother. They believed that by digging and farming it would be like taking a knife and tear her heart apart. 'You ask me to plough the ground! Shall I take a knife and tear my mothers' bosom?' and if you would harm nature, mother earth wouldn't have accepted you when you died. They thought cutting the grass would be like cutting the hair of your mother. They believed that land could not be bought or sold. It belongs to all living things. While the white Americans thought that land was for farming and owning land. They saw land as money and getting rich and thought the Native Americans where crazy not to use it. 'These people must die out,' Horace Greeley wrote, 'God has given this earth to those who will subdue and cultivate it.' Horace Greeley also despised the Native Americans for: '...sitting around the doors of their lodges at the height of the planting season', and said they were '...squalid and conceited, proud and worthless, lazy and lousy'. Society between the Native American and the white American where different because they did not understand each others beliefs so it didn't make sense on both sides why they believed in such things. ...read more.