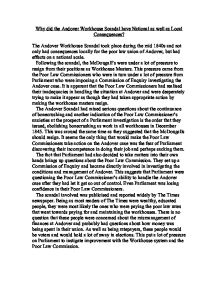 Why did the Andover Workhouse Scandal have National as well as Local Consequences?

Why did the Andover Workhouse Scandal have National as well as Local Consequences? The Andover Workhouse Scandal took place during the mid 1840s and not only had consequences locally for the poor law union of Andover, but had effects on a national scale. Following the scandal, the McDougall's were under a lot of pressure to resign from their positions as Workhouse Masters. This pressure came from the Poor Law Commissioners who were in turn under a lot of pressure from Parliament who were imposing a Commission of Enquiry investigating the Andover case. It is apparent that the Poor Law Commissioners had realised their inadequacies in handling the situation at Andover and were desperately trying to make it appear as though they had taken appropriate action by making the workhouse masters resign. ...read more.

Even Parliament was losing confidence in their Poor Law Commissioners. The scandal involved was publicised and reported widely by The Times newspaper. Being as most readers of The Times were wealthy, educated people, they were most likely the ones who were paying the poor law rates that went towards paying for and maintaining the workhouses. There is no question that these people were concerned about the mismanagement of finances at Andover and probably had questions about how money was being spent in their union. As well as being ratepayers, these people would be voters and would hold a lot of sway in elections. This put a lot of pressure on Parliament to instigate improvement with the Workhouse system and the Poor Law Commission. The situation at Andover led to investigations into other workhouses and their conditions. ...read more.

In 1847, it was abolished and replaced with the Poor Law Board, by Act of Parliament which had greater power and was directly responsible to Parliament. This was likely to have an impact on the management of the Poor Law by allowing Parliament to be much more in control. To conclude, I would say the Andover Workhouse Scandal was pivotal in triggering improvements with the poor law system on a national as well as local scale. Locally to Andover, the workhouse master was forced to resign. On a national scale, after a Parliament investigation into the Andover case, investigations into other workhouses went underway and eventually the Poor Law Commission was replaced with a much more efficient system. However, I think that the most critical consequence of the Andover Scandal was the way that it was publicised and reported, meaning that the public knew of the terrible state of the workhouses and this would have put a lot of pressure on Parliament to bring about improvements. ...read more.