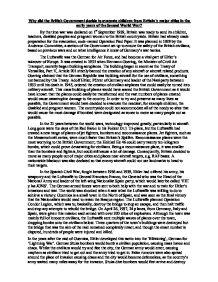 Why did the British Government decide to evacuate children from Britains major cities in the early years of the Second World War?

Why did the British Government decide to evacuate children from Britain's major cities in the early years of the Second World War? By the time war was declared on 1st September 1939, Britain was ready to send its children, teachers, disabled peoples and pregnant women to the British countryside. Britain had already made preparation for the evacuation, code-named Operation Pied Piper. It was planned in 1938 by the Anderson Committee, a section of the Government set up to ensure the safety of the British civilians, based on previous wars and on what intelligence it knew of Germany's war tactics. The Luftwaffe was the German for Air Force, and had become a vital part of Hitler's takeover of Europe. It was created in 1935 when Hermann Goering, the Minister of Civil Air Transport, secretly began building aeroplanes. The building began in secret as the Treaty of Versailles, Part V, Article 201 strictly banned the creation of any aircraft or aircraft related products. Goering claimed that the German Republic was building aircraft for the use of civilians, something not banned by this Treaty. Adolf Hitler, F�hrer of Germany and leader of the Nazi party between 1933 until his death in 1945, ordered the creation of civilian airplanes that could easily be turned into military aircraft. ...read more.

Though the League of Nations attempted to negotiate terms that both of the countries would agree to, Italy refused the offer and easily invaded the country by using tanks, aeroplanes and gas. The League attempted to ban Italy from importing products but to no avail. Meanwhile, Hitler marched his troops into the Rhineland, something strictly prohibited by the Treaty of Versailles. Although France wanted Italy's support, Mussolini annexed Abyssinia and later signed the Rome-Berlin Axis with Hitler. This friendship later evolved into an alliance, which threatened the Allies, as they had seen Germany's Blitzkrieg tactics and Italy's use of gas, tanks and aeroplanes against civilians in Abyssinia In the First World War, Britain had expected to fight a war like previous wars it had fought in. It prepared cavalry, but the horses could not be used in the mud of the Western Front. When Germany began using the machine gun as opposed to the sword, it suffered heavy losses until it could put more guns into production. Both Britain and Germany then began using gas on each other. Xylyl bromide was used by the French with tear gas, which caused the mucus in the nose, throat to enflame and causes sneezing and watery eyes. ...read more.

In conclusion, the decision to evacuate children from their homes and families during the war was one that the Government did not do spontaneously but, after watching the Axis powers' war with other countries, considered necessary to try and prevent as little casualties in the war as possible. Whilst all the factors discussed above would have been factors for evacuation, I believe the most important of the factors was the bombing of Guernica during the Spanish Civil War. When this happened, it showed that Hitler was so determined to achieve his aims that he would obliterate anything that stood in his way, including civilians. The British Government would have seen the beginning of Hitler's Blitzkrieg tactics and would have known that if Hitler carried on invading under his Lebensraum policy, then Chamberlain's policy of appeasement would have to stop and war would begin. When the Allies declared war on Germany, they knew that Germany could respond with immediate force and so decided to put Operation Pied Piper into place then. Though nothing happened in the year that war was declared, people knew that it was inevitable until Hitler began to try and damage Britain. As the Government had already planned the evacuation, it was prepared for Germany and any harm it may have wanted to inflict. ...read more.