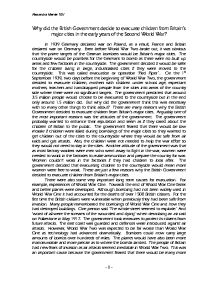 Why did the British Government decide to evacuate children from Britain(TM)s major cities in the early years of the Second World War?

Why did the British Government decide to evacuate children from Britain's major cities in the early years of the Second World War? In 1939 Germany declared war on Poland, as a result, France and Britain declared war on Germany. Even before World War Two broke out, it was obvious that the prime targets of the German bombers would be Britain's major cities. The countryside would be pointless for the Germans to bomb as there were no built up areas and few factories in the countryside. The government decided it would be safer for the children living in large, industrialised cities if they were moved to the countryside. This was called evacuation or operation 'Pied Piper`. On the 1st September 1939, two days before the beginning of World War Two, the government decided to evacuate children, mothers with children under school age, expectant mothers, teachers and handicapped people from the cities into areas of the country side where there were no significant targets. The government predicted that around 3.5 million people would choose to be evacuated to the countryside but in the end only around 1.5 million did. But why did the government think this was necessary with so many other things to think about? There are many reasons why the British Government decided to evacuate children from Britain's major cities. Arguably one of the most important reasons was the attitudes of the government. The government probably wanted to enhance their reputation and seem as if they cared about the children of Britain to the public. The government feared that there would be low morale if children were killed during bombings of the major cities so they wanted to get children out of the cities to the countryside where they would be safe from air raids and gas attacks. Also, the children were not needed to help the war effort so they would not need to stay in the cities. ...read more.

The government who controlled all aspects of the media wanted to encourage British families to evacuate their children for various reasons. Firstly, families might have dismissed the idea of evacuation without much thought or understanding what evacuation would mean. Secondly, some families might have thought they could protect their children better if they stated at home, not realising how bad the war could get. Others thought that they could always decide to evacuate if the War got worse without realising that by then it might be too late. If the British public were encouraged to evacuate their children through the media, they might then change their mind. The government encouraged British families to evacuate their children by use of the posters, leaflets and radio broadcasts. One leaflet about evacuation warns the public about air attacks. The leaflet talks about Britain's air defences but says that the German bombers could still get through. The leaflet reassures parents by telling them that the children's education will be continued and that schools will be evacuated together so the children will be schooled with some of their friends. Through the leaflet, the government tries to seem kind and friendly by sympathising with the families, saying that they understand the heartache of being separated and that they are sure that the children will be looked after. When many evacuees went back home to the cities towards the end of 1939, the government ran a campaign to encourage children and parents to stay where they were but this had little success. A second evacuation took place in 1940 but was much smaller than the one in 1939. The government also used the media to glamorise women's work to make it more appealing as women were urgently needed to work in the Second World War. Many women joined the Women's land army, joined the armed forces or did civil defence jobs. ...read more.

Many evacuees enjoyed evacuation and they were often happier in the countryside as the living conditions were better. A lot of evacuees came from very poor backgrounds and were given new clothes and items by their foster parents. Evacuation also slightly decreased the gap between the rich and the poor. When the children were evacuated, people living happily in the countryside were able to see how poorer people in the cities lived. After evacuation, more of an effort was made by the government to see that the poor had a better way of life. Evacuation also saved many lives which of course was its main purpose. If these children remained in the cities, many of them would have been killed. However, although evacuation was an enjoyable experience for many children, some children did not like it as much. Some evacuees were beaten, abused or neglected by their foster parents. Many foster parents who did not have children of their own did not know how to deal with the children from the city. Also, evacuation caused a lot of upset, parents and children were separated and were miserable. Arguably, evacuation was unnecessary; the bomb damage was not as bad as expected. Instead of 10 000 deaths from each air raid, 60 595 people were killed by air raids in the whole war. Some people think that most children would have been equally as safe if they had stayed at home and gone to an air raid shelter in an attack. Also, evacuating millions of children cost around �9 million when this money could have been spent on warships, fighter planes or supplies. The education of evacuees was severely disrupted even though their teachers were evacuated with them. Although both of these views are fair, I think that overall evacuation was worth it. Many lives were saved and a lot of children preferred life in the country and understood health better than they did before evacuation. Some children regarded evacuation as one of the best times of their lives. ?? ?? ?? ?? Alexandra Mente 10V - 1 - ...read more.