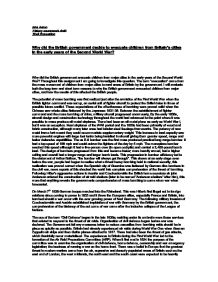 why did the british government evacuate children from major cities in the early years of the 2nd world war?

Jake Aston History coursework draft Ww2 Evacuation Why did the British government decide to evacuate children from Britain's cities in the early years of the Second World War? Why did the British government evacuate children from major cities in the early years of the Second World War? Throughout this assignment I am going to investigate this question. The term "evacuation" came from the mass movement of children from major cities to rural areas of Britain by the government. I will evaluate both the long term and short term reasons to why the British government evacuated children from major cities, and how the results of this affected the British people. The potential of mass bombing was first realized just after the armistice of the First World War when the British fighter command was set up, an aerial unit of fighter aircraft to protect the British Isles in times of possible future conflict. These expectations of the effectiveness of bombing were proved valid when the Chinese saw whole cities flattened by the Japanese 1931-36. Between the establishment of fighter command and the mass bombing of china, military aircraft progressed enormously, By the early 1930s, aircraft design and construction technology throughout the world had advanced to the point where it was possible to mass-produce all-metal airplanes. ...read more.

The use of the term 'Civil Defence' began in the late 1930s; residing under its umbrella were those services that existed to respond to the threat of air raids. Organisation of civil defence began before war was declared. The Government felt any measures taken to reduce casualties from bombing raids should be in place as quickly as possible. Britain had already experienced air raids during World War One when German Zeppelin air ships and then Gotha planes attacked in 1917. There had also been the threat of gas attacks, which thankfully never materialised. The experiences in Britain during the First World War led to the formation of the Air Raid Precautions Committee (ARP). When it first met in 1924 the purpose of the committee was to examine the organisation of civil defence, home defence, censorship and war emergency legislation; the business of running a war on the home front. There was a belief in Europe that the greatest threat in modern warfare came from the air, expansive and densely populated areas of Britain such as the east end of London, the west midlands, the north east and the south coast were expected to be heavily .The plan had been developed in the summer of 1938 by the Anderson Committee. The country was divided into zones, classified as either "evacuation", "neutral", or "reception", with priority evacuees being moved from the major urban centres and billeted on the available private housing in more rural areas. ...read more.

Other important military and industrial centres, such as Belfast, Birmingham, Bristol, Cardiff, Coventry, Glasgow, Sheffield, Swansea, Liverpool, Hull, Manchester, Portsmouth, Plymouth and Southampton, suffered heavy air raids and high numbers of casualties. This proved the governments decision to evacuate children right upon all accounts, during the phoney war many began to disapprove with the government as their forecasted heavy bombing didn't happen and many began to think evacuation was unnecessary an a drain on recourses needed for the war effort, however these views were abruptly contradicted on the 7th of September 1940. The common view of city people was that the country side was a dirty unacceptable place, to send their children, with inefficient food. This however was proven incorrect and shows the diversity of understanding between the city and the country. In the country children were fed better than in the city, often had more exercise than in the city and overall led a much improve lifestyle to what they led in the cities due to a number of factors, this filtered back to parents by means of letters from children which in turn improved the overall moral of the British people knowing that children were safe and leading better lives allowing British people to focus on the war effort and for many mothers this meant working in factories, this boost of workers in factories such as munitions factories saw an over all increase of 15%, weeks after operation pied piper was enforced. ?? ?? ?? ?? ...read more.