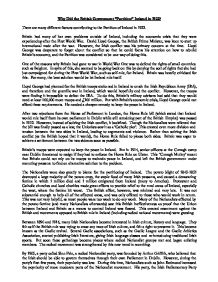 Why Did The British Government Partition Ireland in 1922?

Why Did the British Government "Partition" Ireland in 1922? There are many different factors contributing to the Partition of Ireland in 1922. Britain had many of her own problems outside of Ireland, including the economic crisis that they were experiencing after the First World War. David Lloyd George, the British Prime Minister, was keen to start up international trade after the war. However, the Irish conflict was his primary concern at the time. Lloyd George was desperate to forget about the conflict so that he could focus his attention on how to rebuild Britain's economy, and the Partition was considered to be one way of doing this. One of the reasons why Britain had gone to war in World War One was to defend the rights of small countries such as Belgium. In spite of this, she seemed to be going back on this by denying the sort of rights that she had just campaigned for during the First World War, such as self-rule, for Ireland. Britain was heavily criticised for this. For many, the best solution would be let Ireland rule itself. Lloyd George had planned for the British troops stationed in Ireland to crush the Irish Republican Army (IRA), and therefore end the guerrilla war in Ireland, which would hopefully end the conflict. ...read more.

Several Gaelic associations, such as the Gaelic League and the Gaelic Athletics Association, started publishing Irish literature, giving Irish language classes and re-introducing traditional Irish sports. But soon these gatherings became places where radical Nationalist groups met and began enlisting members. The radical movement was strengthened by this new trend in recruiting. By 1905, a party called Sinn Fein, a radical Nationalist party, was founded by Arthur Griffith, who believed that the Irish should be able to govern themselves through their own Parliament in Dublin. However, during the party's first few years, their popularity was low. During this time, Nationalists such as John Redmond increased the popularity of more moderate parts of the Nationalist movement. His party, the Irish Parliamentary Party (IPP), was popular, gaining more than 80 seats in the Parliament in London in the late nineteenth and early twentieth centuries. In the early twentieth century, the Liberal Government and Redmond agreed that if the latter's MPs supported some laws to be passed, the former would grant Home Rule in Ireland. Nationalists were happy that Home Rule was passed in 1912. However, when disagreements over the Home Rule started to rise, so did support for Sinn Fein. ...read more.

To prove that the Unionists would not let anyone come between them and their political and religious freedom, the UVF landed a massive shipment of illegal arms at Larne port on the 24th -25th August 1914. This was called the Larne gun-running, and was not stopped by local police and army authorities. After the Nationalists formed the Irish Volunteers and armed themselves too, civil war seemed inevitable. Since it was obvious that both sides would use force to get their own way, a solution had to be found to stop the violence. I conclude that the British Government "partitioned" Ireland because of the country being on the verge of civil war. After both the Nationalists and the Unionists armed themselves, Ireland reached crisis point. It was then that Britain realised that by partitioning Ireland, they might have been able to stop the violence and end the Irish conflict. It was impossible for Britain to satisfy both sides: if they kept control of the whole of Ireland, the Nationalists would have claimed that Britain was denying them independence; if they let the Irish control themselves, the Unionists would have said that their political and religious freedom would be in danger. To Britain, the only compromise seemed to be the partition. ?? ?? ?? ?? ...read more.