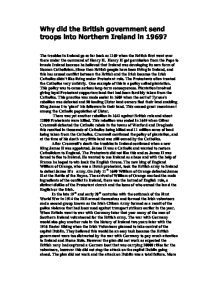 Why did the British government send troops into Northern Ireland in 1969?

Why did the British government send troops into Northern Ireland in 1969? The troubles in Ireland go as far back as 1169 when the British first went over there under the command of Henry II. Henry II got permission from the Pope to invade Ireland because he believed that Ireland was developing its own form of Roman Catholicism. Since then British people have been living in Ireland, and this has caused conflict between the British and the Irish because the Irish Catholics didn't like living under Protestant rule. The Protestants often treated the Catholics very unfairly. One example of this is a policy called plantation. This policy was to cause serious long-term consequences. Plantation involved giving loyal Protestant supporters land that had been forcibly taken from the Catholics. This practice was made easier in 1609 when the earl of Tyrone's rebellion was defeated and 90 leading Ulster land owners fled their land enabling King James I to 'plant' his followers in their land. This caused great resentment among the Catholic population of Ulster. There was yet another rebellion in 1641 against British rule and about 12000 Protestants were killed. ...read more.

After the partition of Ireland in 1922 when Ireland and Northern Ireland split many Irish nationalists were still living in Ulster so the troubles were not over. The Catholic minority had measures taken against them to ensure Unionist control of Northern Ireland, measures like the police being allowed to recruit extra police called the B-specials many of who were ex Ulster volunteers. The B-specials treated the Catholic civilians harshly and over the course of a few years came to be hated by the Catholic community. Control was also ensured politically so even when the Protestants were in the minority they would be sure to win the vote because the vote was restricted to homeowners only. This ruled out most of the poorer Catholics and boundaries were drawn to secure the maximum number of Protestant councillors. This was a process called gerrymandering. The results of gerrymandering meant that the Unionist councils favoured the Protestant community in matters of employment and council housing. It became apparent to the Catholic community that they could not improve their poor living conditions so by the early 1960s the Catholic community started campaigning for social justice. ...read more.

side of the Protestants in riots causing more anger and hatred towards themselves and the Protestant community, which would in turn lead to more violence. So with a biased police force it would be almost impossible keeping the peace. Another major contributor to the violence is Ian Paisley who would stir up anger and hatred within the Protestant community against the Catholics, which would result in the violence. However, in my opinion the main factor which lead to the British army being sent to Northern Ireland in 1969 were the government policies such as gerrymandering which caused the Catholic community to be given poor housing and jobs, which in turn caused them to protest about the treatment they were receiving from local councils which would end up in violence which was mostly started by the Protestants and then this violence would be dealt with by a biased police force who could not keep the peace and would just end up contributing to the violence by taking the side of the Protestants. So in conclusion it is my opinion that the government policies in Northern Ireland after 1922 and the partition of Ireland is a long-term problem that resulted in the deployment of troops by the British government in 1969. ...read more.