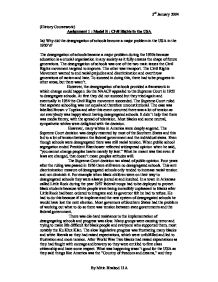 Why did the desegregation of schools become a major problem in the USA in the 1950's?

(History Coursework) Assignment 1 : Model B : Civil Rights in the USA 1a) Why did the desegregation of schools become a major problem in the USA in the 1950's? The desegregation of schools became a major problem during the 1950s because education is a crucial organisation in any society as it fully creates the shape of future generations. The desegregation of schools was one of the two main issues the Civil Rights movement targeted to improve. The other was transport. The Civil Rights Movement wanted to end racial prejudice and discrimination and overthrow generations of racism and hate. To succeed in doing this, there had to be progress in other areas, but there wasn't. However, the desegregation of schools provided a framework in which change could happen. So the NAACP appealed to the Supreme Court in 1952 to desegregate schools. At first they did not succeed but they tried again and eventually in 1954 the Civil Rights movement succeeded. The Supreme Court ruled that separate schooling was not equal and therefore unconstitutional. The case was labelled Brown v Topeka and after this event occurred there was a lot of tension as not everybody was happy about having desegregated schools. ...read more.

As the saying goes 'violence solves nothing.' Fourthly, in the 1960s there were many race riots, for example in Detroit in August 1967, and during these riots there was racism and intense violence which is hardly ever a good thing and because of many race riots and violence the Civil Rights Movement didn't achieve too much. Lastly if you look at how many black people voted in the Southern States before (1965) and after the Voting Rights Act was passed (1971) some States showed only a minimal increase in the number of black people who voted while in some States the percentage even decreased. This is also against the fact the Civil Rights Movement achieved a great deal in the 1950s and 1960s. My conclusion is that it is obvious to me that the Civil Rights Movement put in a lot of work in trying to stop racism and make society fairer and enhance it further. There is plenty of evidence to support the interpretation that the Civil Rights Movement achieved a great deal in the 1950s and 1960s but there is also evidence against the interpretation from both the sources and my own knowledge but I think that on the whole there was undoubtedly progress in many important areas, but there still remained much to be done to create a truly fair and just society. (920 Words) 3rd January 2004 By Mitin Bhalsod 11A ...read more.