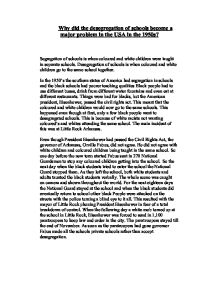 Why did the desegregation of schools become a major problem in the USA in the 1950s? Segregation of schools is when coloured and white children were taught in separate schools. Desegregation of schools is when coloured and white children go to the same school together. In the 1950's the southern states of America had segregation in schools and the black schools had poorer teaching qualities Black people had to use different buses, drink from different water fountains and even eat at different restaurants. Things were bad for blacks, but the American president, Eisenhower, passed the civil rights act. This meant that the coloured and white children would now go to the same schools. This happened even though at first, only a few black people went to desegregated schools. ...read more.

This resulted with the mayor of Little Rock phoning President Eisenhower in fear of a total breakdown of control. When the following day a white mob turned up at the school in Little Rock, Eisenhower was forced to send in 1,100 paratroopers to keep law and order in the city. The paratroopers stayed till the end of November. As soon as the paratroopers had gone governor Fabus made all the schools private schools rather than accept desegregation. So desegregation became a major problem, as there was a break down of law and order in American cities, which ended up in Army paratroopers being sent in to protect coloured people. Also as a result of the Little Rock incident being broadcasted around the world, it gave the Americans a bad name. ...read more.

Another group of people that did not agree with desegregation of schools is white politicians. This is because they knew that a black persons vote is crucial now, so even if the politician hate black people they will not get voted in as the black's votes are important. The best example of this was President Kennedy who got voted in by a majority of black people. So the incident at Little Rock Arkansas reflects badly on America as the scenes were shown live on television and was shown all across America. This means that all Americans seen what happened. Also it reflects badly in the eyes of Russia. America is supposed to be the land of the free, but the scenes at Little Rock do not show that coloured people are living freely. Words 721 By Anthony Reynolds ...read more.

The author has a clear understanding of those who opposed desegregation and of the events at Little Rock in 1952. There is some evaluation that helps answer the question but it comes after an explanation of events, rather than using events as evidence for the author's points. More examples of desegregation attempts would have been useful; Little Rock's problems were the exception, rather than the norm. 4 stars.