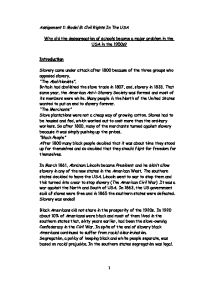 Assignment 1: Model B: Civil Rights In The USA Why did the desegregation of schools become a major problem in the USA in the 1950s? Introduction Slavery came under attack after 1800 because of the three groups who opposed slavery. "The Abolitionists". Britain had abolished the slave trade in 1807, and, slavery in 1833. That same year, the American Anti- Slavery Society was formed and most of its members were white. Many people in the North of the United States wanted to put an end to slavery forever. "The Merchants" Slave plantations were not a cheap way of growing cotton. Slaves had to be housed and fed, which worked out to cost more than the ordinary workers. So after 1800, many of the merchants turned against slavery because it was simply pushing up the prices. "Black People" After 1800 many black people decided that it was about time they stood up for themselves and so decided that they should fight for freedom for themselves. In March 1861, Abraham Lincoln became President and he didn't allow slavery in any of the new states in the American West. The southern states decided to leave the USA. Lincoln went to war to stop them and this turned into a war to stop slavery (The American Civil War) .It was a war against the North and South of USA. In 1863, the US government said all slaves were free and in 1865 the southern states were defeated. Slavery was ended! Black Americans did not share in the prosperity of the 1920s. In 1920 about 10% of Americans were black and most of them lived in the southern states that, sixty years earlier, had been the slave-owning Confederacy in the Civil War. In spite of the end of slavery black Americans continued to suffer from racial discrimination. Segregation, a policy of keeping black and white people separate, was based on racial prejudice. ...read more.

and asked for help. The NAACP was eager to assist the Browns, as it had long wanted to challenge segregation in public schools. Other black parents joined Brown, and, in 1951, the NAACP requested a ban that would forbid the segregation of Topeka's public schools. The U.S. District Court for the District of Kansas heard Brown's case from June 25-26, 1951. At the trial, the NAACP argued that segregated schools sent the message to black children that they were inferior to whites; therefore, the schools were basically unequal. One of the expert witnesses, Dr. Hugh W. Speer, testified that: "...if the coloured children are denied the experience in school of associating with white children, who represent 90 percent of our national society in which these coloured children must live, then the coloured child's curriculum is being greatly curtailed. The Topeka curriculum or any school curriculum cannot be equal under segregation." The Board of Education's defence was that, because segregation in Topeka and elsewhere pervaded many other aspects of life, segregated schools simply prepared black children for the segregation they would face during adulthood. The board also argued that segregated schools were not necessarily harmful to black children; great African Americans such as Frederick Douglass, Booker T. Washington, and George Washington Carver had overcome more than just segregated schools to achieve what they achieved. The request for a ban put the court in a difficult decision. On the one hand, the judges agreed with the expert witnesses; in their decision, they wrote: Segregation of white and coloured children in public schools has a detrimental effect upon the coloured children...A sense of inferiority affects the motivation of a child to learn. On the other hand, the example of Plessey v. Ferguson allowed separate but equal school systems for blacks and whites, and no Supreme Court ruling had overturned Plessey yet. Because of the example of Plessey, the court felt "forced" to rule in favour of the Board of Education. ...read more.