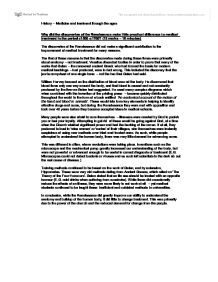 Why did the discoveries of the Renaissance make little practical difference to medical treatment in the period c1500-c1700?

Why did the discoveries of the Renaissance make little practical difference to medical treatment in the period c1500-c1700? (12 marks - 18 minutes) The discoveries of the Renaissance did not make a significant contribution to the improvement of medical treatment for many reasons. The first of these reasons is that the discoveries made during these times were primarily about anatomy - not treatment. Vesalius dissected bodies in order to prove that many of the works that Galen - the renowned ancient Greek who had formed the basis for modern medical teachings - had produced, were in fact wrong. This included the discovery that the jaw is comprised of one single bone - not the two that Galen had said. ...read more.

These would late form key elements in helping to identify effective drugs and cures, but during the Renaissance they were met with opposition and took over 40 years before they became accepted ideas in medical schools. Many people were also afraid to cure themselves - illnesses were created by God to punish you or test your loyalty. Attempting to get rid of these would be going against God, at a time when the Church wielded significant power and had the backing of the crown. If at all, they preferred to trust in 'wise women' or 'curies' of their villages, who themselves were instantly suspicious of using new methods over tried-and-trusted ones. ...read more.

Training methods continued to be based on the work of Galen, and by extension, Hippocrates. These were very old methods dating from Ancient Greece, which relied on 'The Theory of the Four Humours'. Galen stated that an illness should be treated with an opposite humour (E.G. cold drinks when suffering from sunstroke). While these did occasionally reduce the effects of an illness, they were more likely to not work at all - yet medical students continued to be taught these inefficient and outdated methods in universities. In conclusion, while the Renaissance did greatly improve our ability to understand the anatomy and buildup of the human body, it did little to change treatment. This was primarily due to the power of the church and the reduced demand for change from the people. ?? ?? ?? ?? History - Medicine and treatment through the ages ...read more.

The strength of this answer is that it has a sharp focus on the period and does give quite a range of accurate and correct reasons why treatments were not improved. It could be improved with more explanation at the end of each paragraph and some information about the treatment for disease. ***