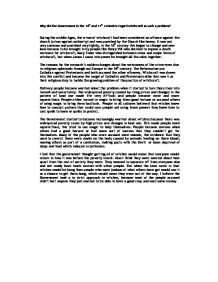 Why did the Government regard witchcraft as such a problem ?

Why did the Government in the 16th and 17th centuries regard witchcraft as such a problem? During the middle Ages, the crime of witchcraft had been considered an offence against the church (crime against authority) and was punished by the Church like heresy. It was not very common and punished very lightly, in the 16th century this began to change and new laws became to be brought in by people like Henry VIII who decided to impose a death sentence for witchcraft, Mary Tudor who distinguished between minor and major forms of witchcraft, but when James I came into power he brought all the rules together. ...read more.

The widespread poverty caused by rising prices and changes in the pattern of land use made life very difficult and people became more and more superstitious. People either turned to magic to bring them good fortune or accused others of using magic to bring them bad luck. People in all cultures believed that witches knew how to concoct potions that could cure people and using these powers they knew how to cast spells to harm or spells to protect. The Government started to become increasingly worried about witches because there was widespread poverty cause by high prices and changes in land use. ...read more.

I feel that the government thought getting rid of witches would mean that everyone would return to how it was before the poverty struck. Also I think they were worried about how apart from the rest of society they were. They seemed to separate off from everyone else and not really have much contact with other people. But when the laws came in that witches would be hung then people who were jealous of what others have got would use it as a chance to get them hung, which would mean they were out of the way. I believe the Government took a to strict approach to witches, because most of the people accused didn't hurt anyone they just wanted to be able to have a good crop and earn some money. ...read more.