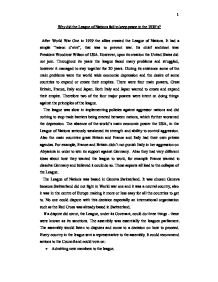 Why did the League of Nations fail to keep peace in the 1930's?

Why did the League of Nations fail to keep peace in the 1930's? After World War One in 1919 the allies created the League of Nations. It had a simple "raison d'etre", that was to prevent war. Its chief architect was President Woodrow Wilson of USA. However, upon its creation the United States did not join. Throughout its years the league faced many problems and struggled, however it managed to stay together for 20 years. During its existence some of the main problems were the world wide economic depression and the desire of some countries to expand or create their empires. There were four main powers, Great Britain, France, Italy and Japan. Both Italy and Japan wanted to create and expand their empire. Therefore two of the four major powers were intent on doing things against the principles of the league. The league was slow in implementing policies against aggressor nations and did nothing to stop trade barriers being erected between nations, which further worsened the depression. The absence of the world's main economic power the USA, in the League of Nations seriously weakened its strength and ability to control aggression. Also the main countries great Britain and France and Italy had their own private agendas. For example, France and Britain didn't not punish Italy in her aggression on Abyssinia in order to win its support against Germany. ...read more.

Ten years after the Treaty, and after the economic depression key members of the league had new political systems (fascist Mussolini in Italy) and the desire for access to mineral wealth (Japan in Manchuria) and therefore key members of the league took on an aggressive policy against the spirit of the league. In the late 1920's the American economy was booming and the USA was the richest country in the world. The success of America benefited many countries that loaned or traded with it. As countries co-operated with each to trade and grew richer the world became more peaceful and the leagues job became easier. At the beginning American economy boomed millions of Americans gambled on the New York stock exchange on Wall Street. Between 1927 and 1929 the average share rose 300 per cent. This meant that $10 invested in 1927 was worth was worth $30 in 1929.by this time many American investors believed their shares would not rise any further and were forced to sell them, this caused a general panic and soon all the share holders were trying to sell and the value of the shares collapsed. Many American banks owned shares and lost huge amounts of money in the Wall Street crash. They now wanted their money back from Germany. The greatest financial crisis in US history, the collapse of the stock market ended a period of prosperity and ushered in the Great Depression. ...read more.

Mussolini wanted revenge on his humiliating defeat. Also in Abyssinia there was fertile soil and mineral wealth, which Mussolini had his eye on. He mostly wanted glory and a larger empire. In December 1934 Benito Mussolini accused the Abyssinians of aggression at an oasis called Wal Wal. He ordered Italian troops, already situated in Somaliland and Eritrea to attack Abyssinia. He had thoughtfully planned this as the had stockpiled there large quantities of ammunition and supplies had been. In October of 1935, the Italian army invaded Abyssinia. The Abyssinians stood no chance against the modern Italian army. After the invasion Haile Selassie appealed to the league for help. The league did two things: condemned the attack and imposed economic sanctions against Italy. However, it took 6 weeks for the sanctions to be organised and they still did not include oil sanctions. Britain and France secretly gave a part of Abyssinia to Italy as part of their plan to keep Italy on their side against Germany. They didn't consult the league and though about themselves other than the rest of the nation. This was really the last straw for the league. It had struggled to stay together for far too long and even the main powers weren't obeying the rules. It is also possible that both Britain and France considered the war too far away to be of any importance to them. They were not prepared to risk their naval power in the Mediterranean for the sake of a country barely anybody had heard of in either France or Britain. 1 ...read more.