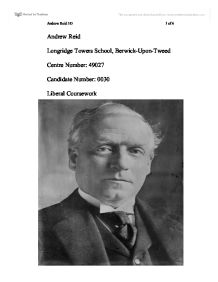 Andrew Reid Longridge Towers School, Berwick-Upon-Tweed Centre Number: 49027 Candidate Number: 0030 Liberal Coursework WHY DID THE LIBERALS DECILINE BETWEEN 1906-1918? The last time that the Liberal Party had a victory in the British General Elections was in January 1906. The Reform Bills in 1918 and 1928 had allowed the majority of people to have the vote. In 1918 men over the age of twenty one and women over the age of thirty could vote in the elections. In 1928 it was decided that all men and women over the age of twenty were to be enfranchised. The people were starting to realise that the Liberals had let them down. The Labour Party appeared to have a vision for working class people. They spoke of improving social conditions, people's wages and the housing for the working class people. This was an attractive alternative, for the working class. In addition with the obvious decline of the Liberal Party people tended to vote Conservative in order not to split the vote against the Labour Party. The Liberals were against the Suffragettes before World War One. Asquith, the Prime Minister, at this time was strongly against women having the right to vote. The Suffragettes put their case forward in a non violent way but eventually began to burn churches and politicians houses. They went on hunger strike in jail and the Liberals had to introduce the Cat and Mouse Act where the sick women were released from prison only to be recaptured again when they had recovered. Emily Davison actually died at the feet of the Kings horse at the Epson Derby in 1913 to protest against the situation. ...read more.

Soldiers were mentally scarred and many lost their mind because of the strain of daily living. The people at home saw these men coming home injured or dead and they in turn blamed the Liberals. Asquith was a bad leader in the eyes of the British public. He had failed as a war leader and therefore was unelectable. He was blamed for all the injuries that had taken place in the war. Lloyd George forced Asquith to resign in 1916. After this a General Election was held and the Party was split. Lloyd George's Liberals against Asquith's Liberals and the Party never recovered from this. The votes were now split between them. Lloyd George became Prime Minister. Had this not happened Britain may well have lost the war. Britain was low on ammunition with only with only three days supplies left. They had very few guns or tanks' coming out of the factories and this was a danger. Lloyd George reorganised this and the production of such things became better. Lloyd George worked quickly and effectively with Clemenceau, the French Prime Minister and advanced into Germany. They became great friends and could work together in order to get things done. They were both respected by Woodrow Wilson who too helped with the war after USA entry in 1917. Ludendorff's offensive was forced back into Germany and the allies began to win battles in France. Lloyd George and Clemenceau organised the blockade that cut supplies to and from Germany, which greatly helped the eventual outcome, of the war. At this time Labour helped the war effort despite the fact that they were against the war. ...read more.

He appealed to all and he was popular. Ramsay MacDonald was brought up in the north of Scotland. He was an illegitimate child and working class people liked him and felt he deserved to be where he was in politics. He was the man of the workers. His mother was a fisherwoman and so he had experienced poverty at first hand. His mother had to pay for his education as it was not free at this time. She had to work long hours in cold conditions to afford this. He attended Glasgow University and was seen as the people's friend. He was a self made man and this appealed to all working class voters. All this shows is that the Liberals had failed for a number of reasons. The suffragettes had caused many problems for the Liberals as they were determined on achieving equality between men and women and securing the vote. Asquith did not agree with this. World War One was a big failing for the Liberals as they had told the soldiers the war would be over by Christmas and they believed them. Asquith was blamed as he controlled the army and put incompetent Generals in charge. The split of the Liberal Party in 1916 between Lloyd George and Asquith factions made many people turn to Labour. Ramsay MacDonald was becoming a hero by offering a policy for everyone compared to the Liberals social policy of 'Wait and See'. This policy failed to impress anyone and the Labour Party looked attractive as a result. Labour on the other hand was putting forward new ideas for everyone and had a vision for the future. All these important events led to the decline of the Liberal Party between 1906-1918. A decline which they never returned from. ...read more.