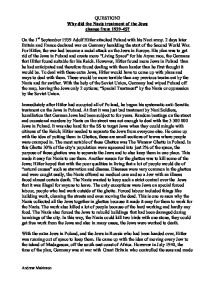 Why did the Nazis treatment of the Jews change from 1939-45?

QUESTION2 Why did the Nazis treatment of the Jews change from 1939-45? On the 1st September 1939 Adolf Hitler attacked Poland with his Nazi army. 2 days later Britain and France declared war on Germany heralding the start of the Second World War. For Hitler, the war had become a racial attack on the Jews in Europe. His plan was to get rid of the Jews in Poland and create more "Living Space" for his Aryan race, the Germans that Hitler found suitable for his Reich. However, Hitler found more Jews in Poland than he had anticipated and therefore found dealing with them harder than he first thought it would be. To deal with these extra Jews, Hitler would have to come up with plans and ways to deal with them. These would be more terrible than any previous treatment by the Nazis and far swifter. With the help of the Soviet Union, Germany had wiped Poland off the map, leaving the Jews only 2 options; "Special Treatment" by the Nazis or oppression by the Soviet Union. Immediately after Hitler had occupied all of Poland, he began his systematic anti-Semitic treatment on the Jews in Poland. At first it was just bad treatment by Nazi Soldiers, humiliation that German Jews had been subject to for years. ...read more.

They swept across the continent shooting, gassing, beating or torturing to death any Jews they found. Those that were not murdered by the Death Squads were put into newly formed ghettos like the one in Warsaw. Some were sent to already overcrowded ghettos making things worse. The Nazis were clearing Europe of all Jews, making living space for his Aryan Race, the task he had set out to do in the first place. In January 1942, Hitler and a group of Nazi officials met in a town, just outside of Berlin, called Wansee, to discuss the future of the Jewish "problem". This conference came shortly after America joined in the war. Hitler knew he faced the most powerful country in the world and was not prepared for a long conflict. His hate towards the Jews turned into frustration. Another reason for this was that the German advance had ground to a halt in Soviet Russia so Hitler's plan to deport the Jews East was impossible. During the Nazi advance in Russia, they had suffered heavy losses and Hitler believed that the Jews were responsible. Joseph Goebbels, Nazi propaganda minister, noted this in his diary: "If the German people have sacrificed 160 000 dead in the eastern campaign, so the authors of this bloody conflict will have to pay for it with their lives". ...read more.

Towards the end of the war, the Nazis tried their best to destroy all knowledge of the Holocaust and the brutal treatment of the Jews. However resistance groups such as the Jewish Sonderkommando were able to smuggle or hide letters and photos about what was really going on. Thanks to these letters we know what happened and by doing this, the Jews defied the Nazis and Adolf Hitler. In 1945, the Nazis surrended signalling the end of the Second World War. Allied troops liberated camps from the east whilst Soviet troops did the same from the west. They found thousands of dead and dying Jews, the only survivors of the Holocaust that had started many years back in 1933, with Hitler's rise to power. Firstly the Jews were discriminated with the Nuremberg and other anti-Semitic laws with the view of making life so hard in Germany that the Jews would leave for other countries. However somewhere along the line, the Nazis changed their ideas and separated Jews into ghettos and work camps. This separated them from the Aryan Germans and made it easier to target them. Then, as the war drew to an end, the Germans did their best to eliminate every Jew in Europe. At the end of the war, hundreds of thousands of Jews left Europe for Palestine and rebuilt a Jewish homeland so that they would never again be the persecuted minority. Andrew Makinson ...read more.