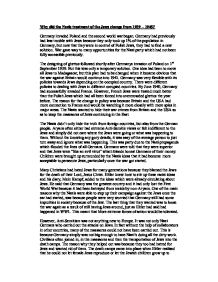 Why did the Nazis treatment of the Jews change from 1939 - 1945? Germany invaded Poland and the second world war began. Germany had previously had less trouble with Jews because they only took up 1% of the population in Germany, but now that they were in control of Polish Jews, they had to find a new solution. War gave way to many opportunities for the Nazi party which had not been fully accessible previously. The designing of ghettos followed shortly after Germanys invasion of Poland on 1st September 1939. But this was only a temporary solution. One idea had been to move all Jews to Madagascar, but this plan had to be changed when it became obvious that the war against Britain would continue into 1941. Germany was very flexible with its policies towards Jews depending on the occupied country. There were different policies to dealing with Jews in different occupied countries. By June 1940, Germany had successfully invaded France. However, French Jews were treated much better than the Polish Jews which had all been forced into overcrowded ghettos the year before. The reason for the change in policy was because Britain and the USA had more connection to France and would be watching it more closely with more spies in major areas. ...read more.

The new technology which was around soon lead to development of murder by gas. After experimenting with gas chambers, Himmler soon discovered a method which would kill Jews by the millions without the mess and hassle of shooting. This was known as the 'Final Solution' to the 'Jewish Question'. In what ways did the Nazis try to eliminate all Jews in Europe in the years from 1941 onwards. The Ghettos which were built in 1939 had lead to the deaths of over hundreds of thousand Jews. People were not supposed to survive easily in the ghettos. Their rations only consisted of only 300 calories daily, that is one thousand and seven hundred less calories than humans are meant to be able to survive on. Warsaw had been the worst. By 1941, more than 1,000 Jews would die each week as a result of the awful living conditions which the Nazis forced them to endure. A third of the cities population had been Jewish and they had all been forced into just 3 per cent of the living space available. With horrible overcrowding and only 1 per cent of the homes having running water, disease spread quickly. ...read more.

Treblinka train station had even been designed so that it would look like any normal station with signs for the 'restaurant'. In Treblinka, there was no labour camp and so everyone who arrived was gassed by carbon monoxide. In one hour, 1,000 people could be gassed and killed. The commandant of Auschwitz, Rudolf Hoess, made what he calls an 'improvement' in source H, when he decided to build chambers capable of containing 2,000 people and use Zyklon B to gas the Jews. The Death Camps was not the only way in which Jews were murdered. In the labour camps, Jews were expected to survive about three months as a result of the living conditions there. It was worked out that a person who was not doing any physical activities, would need a minimum of 2,000 calories a day to survive. The Jews were given 1,500 calories and were forced to work for Germany. many were literally worked to death by the Nazis. In the camps Jews were said to have the worst conditions in order to speed up their elimination. By the end of the war, the Nazis had killed 6 million of Europe's 11 million Jews. There is no doubt that had they won the war, they would have gone on to try and wipe out the entire Jewish population in Europe. ...read more.