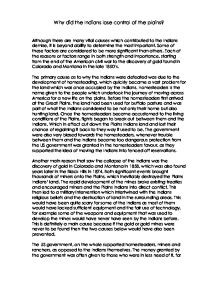 Why Did The Plains Indians Lose Control Of The Plains

Why did the Indians lose control of the plains? Although there are many vital causes which contributed to the Indians demise, it is beyond ability to determine the most important. Some of these factors are considered to be more significant than others. Each of the reasons or factors range in both strength and importance, starting from the end of the American civil war to the discovery of gold found in Colorado and Montana in the late 1850's. The primary cause as to why the Indians were defeated was due to the development of homesteading, which quickly became a vast problem for the land which was once occupied by the Indians. Homesteaders Is the name given to the people which undertook the journey of moving across America for a new life on the plains. Before the homesteaders first arrived at the Great Plains, the land had been used for buffalo pasture and was part of what the Indians considered to be not only their home but also hunting land. Once the homesteaders became accustomed to the living conditions of the Plains, fights began to break out between them and the Indians. Which in effect cut down the Plains Indians land and lost their chance of regaining it back to they way it used to be. ...read more.

They were then banned from leaving the reservations at any time, and so forth the government had taken away their power to resist. These two causes are linked together, because if the US government hadn't of decided to be in favour of the homesteaders, then no reservations would have been set up in the first place. Enabling the Indians to win back what land was rightly theirs before hand. As soon as the government received any confirmation of conflict, the US army would have been sent in to help control the attacks. The US army were far too powerful for the Indians, which made it very challenging for them to fight back. The system of forts gave the US army bases total authority in which to control the Great Plains and the people living on them, i.e. the Indians, homesteaders and/or miners. The introduction of such strategies would have suspended any of the Indian tactics and would have prevented them from being able to fight the army on equal terms. Usually the Indians always appeared to be less armed than the army as a whole; every soldier which was involved was either armed with a rifle or a Gatling gun which looking back at the event would now seem extremely unfair. ...read more.

The last main reason that saw the collapse of the Indians was the American 'Manifest Destiny'. Most of the American population believed that it was their Manifest Destiny to occupy the whole of the continent from one side of America to the other. This is almost a justification or almost a cover up which led to the way they treated the Plains Indians so badly. It also lay behind the mistreatment of other ethnic groups at the time too. 'Manifest Destiny' was an important reason because it was almost seen as the American's guide or a task which had to be seen through. However the reasons such as the arrival of the Homesteaders and the discovery of the gold mines are more primary causes, where as the rest are more secondary causes. All the reasons above each contributed in someway to the downfall of the Indians living on the Great Plains. Without one the other wouldn't have happened, each one of the reasons is linked in one way or another. Overall I think that the most significant reason was the development of homesteading. This is because once homesteaders had moved onto the Plains; conflict broke out between them and the Indians causing the rest of the reasons to take place. ...read more.