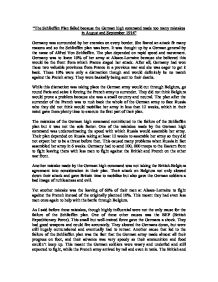 Why did The Schlieffen Plan fail?

Germany was surrounded by her enemies on every border. She feared an attack fir many reasons and so the Schlieffen plan was born. It was thought up by a German general by the name of Alfred Von Schlieffen. The plan depended on rapid speed and movement. Germany was to leave 10% of her army at Alsace-Lorraine because she believed this would be the front from which France staged her attack. After all, Germany had won these two valuable provinces from France in a previous war and she was eager to get it back. These 10% were only a distraction though and would definitely be no match against the French army. They were basically being sent to their deaths.

While this distraction was taking place the German army would cut through Belgium, go round Paris and seize it forcing the French army to surrender. They did not think Belgium would prove a problem because she was a small country and neutral. The plan after the surrender of the French was to rush back the whole of the German army to face Russia who they did not think would mobilise her army in less than 12 weeks, which in their mind gave them plenty time to execute the first part of their plan.

The mistakes of the German high command contributed to the failure of the Schlieffen plan but it was not the sole factor. One of the mistakes made by the German high command was underestimating the speed with which Russia would assemble her army. Their plan depended on Russia taking at least 12 weeks to assemble her army so they did not expect her to be a threat before then. This caused many problems when Russia in fact assembled her army in 6 weeks. Germany had to send 100, 000 troops to the Eastern front to fight leaving them with less men to fight against the British and French on the other war front.

Another mistake made by the German high command was not taking the British-Belgium agreement into consideration in their plan. Their attack on Belgium not only slowed down their attack and gave Britain time to mobilise but also gave the German soldiers a bad image of ruthlessness and evil.

Yet another mistake was the leaving of 60% of their men at Alsace-Lorraine to fight against the French instead of the originally planned 10%. This meant they had even less men once again to help with the battle through Belgium.

As I said before these mistakes, though highly influential were not the only cause for the failure of the Schlieffen plan. One of these other causes was the BEF (British Expeditionary Force). This small but well-trained force gave the Germans a shock. They had good weapons and could fire accurately. They slowed the Germans down, but were still hugely outnumbered and eventually had to retreat. Another cause that led to the failure of the Schlieffen plan was the fact that the German army made almost all their progress on foot, and their advance was very speedy so their ammunition and food couldn’t keep up. This meant the German soldiers were weary and underfed and still expected to fight, while the French army arrived by rail and even in taxis. The British and French were therefore able to drive the Germans back but not completely out of France. Though some may argue that the lack of substantial supplies for the German army, was still a mistake made by their high command.