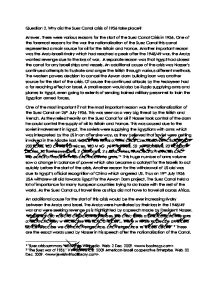 Why did the Suez Canal crisis of 1956 take place?

Question 2. Why did the Suez Canal crisis of 1956 take place? Answer. There were various reasons for the start of the Suez Canal Crisis in 1956. One of the foremost reasons for the war the nationalization of the Suez Canal this canal represented a main source for oil for the Britain and France. Another important reason was the Arab-Israeli rivalry which had reached a peak after the 1948/49 war, the Arabs wanted revenge due to the loss of war. A separate reason was that Egypt had closed the canal for any Israeli ships and vessels. An additional cause of the crisis was Nasser's continued attempts to frustrate and anger the British through various different methods. The western powers decision to cancel the Aswan dam building loan was another source for the start of the crisis. Of course the continued attacks by the Fedayeen had a far reaching effect on Israel. A small reason would also be Russia supplying arms and planes to Egypt, even going to extents of sending trained military personnel to train the Egyptian armed forces. ...read more.

"Egypt has decided to dispatch her heroes, the disciples of pharaoh and the sons of Islam and they will cleanse the Land of Israel. ... There will be no peace on Israel's border because we demand vengeance, and vengeance is Israel's death." 2 These are the exact words used by Nasser in his speech after the nationalization of the Canal. These strong words proved and revealed that the Arabs were willing to go to any extent to gain revenge against the Israelis and eradicate them from the face of Middle Eastern map. A further cause of concern for the Israelis was the Fedayeen. They had killed more than 300 families in Israel by infiltrating to Israel from borders and committing acts of murder and sabotage. A reason worth mentioning for a cause of the war was the refugee crisis. Since 1948 the numbers of Palestinian refugees was increasing and they had become a liability to many Arab nations such as Syria, Egypt and Jordan. The Arabs were determined to get the land back and put these refugees back to their former homes. ...read more.

The two nations were angry at the nationalization of the Canal and came together to battle the Egyptians. The tensions caused by Arab boycott of Israel trade from Suez Canal was another cause of the war. As it was a hassle for the Israeli's to do trade without the help of the Suez Canal due to the increased journey time. This was the first war where external influence played a major part. This war also became a ground for the cold war between the US and the Soviets. In the end this war became a battle ground between the British and France against the Soviets as both played a big role in this war. By the end of the war Israel had managed to procure a cease fire for a few years but it had just added fuel to the ever increasing rivalry between the Arabs and the Israelis. This war was largely won by the Israel by the help of the superpowers Britain and France who supplied arms and added military support to the Israelis. 1 "Suez crisis summary." Bookrags. Wikipedia. Web. 2 Dec. 2009. <www.bookrags.com>. 2 "The Suez war of 1956." Virtual library. 2009 American-Israeli cooperative Enterprise. Web. 02 Dec. 2009. <www.jewishvirtuallibrary.com>. ?? ?? ?? ?? ...read more.