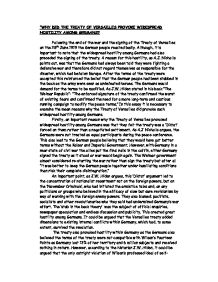 Why did the treaty of versailles provoke widespread hostility among Germans?

"WHY DID THE TREATY OF VERSAILLES PROVOKE WIDESPREAD HOSTILITY AMONG GERMANS? Following the end of the war and the signing of the Treaty of Versailles on the 28th June 1919 the German people reacted badly. Although, it is important to note that the widespread hostility among Germans had also preceded the signing of the treaty. A reason for this hostility, as A.J. Nicholls points out, was that the Germans had always been told they were fighting a defensive war and therefore did not regard themselves as responsible for the disaster, which had befallen Europe. After the terms of the treaty were accepted this reinforced the belief that the German people had been stabbed in the back as the army were seen as undefeated heroes. The Germans would demand for the terms to be modified. As J.W. Hiden stated in his book "The Weimar Republic": "The enforced signature of the treaty confirmed the worst of existing fears and confirmed the need for a more long-term and cautious running campaign to modify the peace terms." In this essay it is necessary to examine the mean reasons why the Treaty of Versailles did provoke such widespread hostility among Germans. ...read more.

Hiden argues, Germany's exclusion from the League of Nations underlined the arguments of German nationalists against the Diktat of Versailles. This disillusionment made it easier for Germans to accept the false notion propagated by right wing and nationalist circles that such an "unjust" peace need never have been signed in the first place. The Germans were also angry as they had been denied the rights of self determination that had been granted to other nations. This frustrated many Germans and as Alan Sharp points out in "Versailles 1919: 'A tragedy of Dissapointment' many Germans asked:" Why were the Germans of Austria, the Sudetenland, the Polish corridor and Danzig, even of Alsace-Lorraine and Schelswig, denied the rights of self-determination?" This was an important reason why the Germans found the treaty unjust and felt their enemies had great advantages over them. The Treaty of Versailles was devastating to German national security and thus was another reason why the treaty provoked widespread hostility within Germany. The treaty demilitarised the Rhineland, reduced the German navy and army to 15,000 sea men and 100,000 soldiers. The Germans were also to possess no air force, secret service, tanks or submarines. ...read more.

As A.J. Nicholls argued certainly no atmosphere of peace descended on Germany with the signing of the treaty; if anything hostility to the victor powers became more marked, and was reinforced by hatred for those at home regarded as tools of the enemy. The Germans felt the treaty was a Diktat, they felt very bitter about the loss of people and territory, angry about the denied rights of self-determination, humiliated by their reduced military powers, resented the reparations and did not accept that they were solely responsible for the war. The harshness of the treaty was such that widespread hostility in Germany hardened in many people into a solemn resolve to see the terms of the treaty overturned and to see Germany revenged for her treatment at the hands of the Allies by a future, successful, war. As stated by Alan Sharp: "The settlement neither crippled Germany nor reconciled her to the new order; instead it left her with grievances and the latent potential to make trouble." Only a great victory would satisfy the hostile and angered Germans, who thus, after economic collapse in 1929, and the failure of the Weimar republic, began to support the ideas of Hitler and the Nazis. ...read more.

The student constantly links their answer to the question set which is very impressive at GCSE level and they support their argument well throughout. I would argue that the essay, at times, lacked some fluency in it as it jumped ...

The student constantly links their answer to the question set which is very impressive at GCSE level and they support their argument well throughout. I would argue that the essay, at times, lacked some fluency in it as it jumped around a bit from one point to another, but this is almost unavoidable in many cases. Such that there were places where the student stated, gave evidence and then just left it hanging. It was obvious it linked to the question, but perhaps it was not linked well enough to the next point that they were about to make. The best way to help such problems is thorough planning along with plentiful proof reading. However, I do not feel that this minor flaw would affect the student's mark greatly.

The student's analytical skills are very high in this essay. They showed a clear understanding of the title of the essay through their analysis of the evidence that they gave to back up their argument. However, they lacked the step to conclude their own argument in each paragraph coherently. They like to state historians view which agree with a statement they had made earlier, but they fail to make it explicit that that is the line of argument that are taking. Sometimes, stating the obvious can be beneficial as long as it is not overdone - getting the balance right comes with practise. Their judgements brought them to an appropriate conclusion, which came by no surprises. This is good as the examiner should not find their conclusion a surprise and paragraphs should naturally lead onto their concluding point.

The spelling, grammar and punctuation are fine and the appropriate technical terms were used. One major flaw in this essay is the absence of referencing where the quotes came from! This could count as plagiarism and so students must be careful. The student follows the typical suggested way of essay writing for GCSE level (introduction, selection of points to argue for and against and conclusion). Their work was clear to follow which helps the examiner identify the marks to award very quickly.