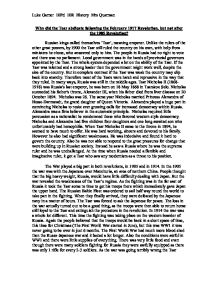 Why did the Tsar abdicate after the 1917 revolution

Why did the Tsar abdicate following the February 1917 Revolution, but not after the 1905 Revolution? Russian kings called themselves 'Tsar', meaning emperor. Unlike the rulers of the other great powers, by 1900 the Tsar still ruled the country on his own, with help from ministers he chose, who answered only to him. The people in Russia had no right to vote and there was no parliament. Local government was in the hands of provincial governors appointed by the Tsar. The whole system depended a lot on the ability of the Tsar. If the Tsar was talented and a strong leader then the government might work well, despite the size of the country. But in complete contrast if the Tsar was weak the country may slip back into anarchy. Therefore most of the Tsars were harsh and repressive in the way that they ruled. In many ways, Russia was still in the middle ages. Tsar Nicholas II (1868-1918) was Russia's last emperor, he was born on 18 May 1868 in Tsarskoe Selo. Nicholas succeeded his father's throne, Alexander III, when his father died from liver disease on 20 October 1894. Nicholas was 26. The same year Nicholas married Princess Alexandra of Hesse-Darmstadt, the grand daughter of Queen Victoria. Alexandra played a huge part in convincing Nicholas to resist ever growing calls for increased democracy within Russia. ...read more.

Therefore because they worked together they had one strong rebellion instead of a few smaller ones like in 1905. Also in 1917 there was no one to crush the rebellion because the soldiers were fighting in WW1 and the soldiers that weren't fighting had rebelled as well and were helping the people. In 1905 the rebels/opposition didn't work together so they were crushed by the force of the soldiers whereas in 1917 they rebels worked together to form one big rebellion. Also one of the key reasons the rebellion worked in 1917 and not 1905 was the fact that there was no soldiers available to crush the rebellion as they were either helping the rebellion or fighting the war. The Tsar had the biggest effect on his own abdication, what were the things he did differently in 1905 than in 1917? In 1905 the decision that I believe saved him was the peace treaty with Japan as this enabled him to keep his troops trust and so he could bring them back and crush the rebellion. If he hadn't of done this then he would not have had any protection and the rebellion would probably have spiraled out of his hands. In 1905 he also indirectly sparked of the rebellion, this was because of his troops opening fire on an unarmed group of protesters which had women and children in it. ...read more.

Also in 1917 everything was worse there was little food little money so the people were already annoyed and unhappy before the rebellion. I believe that there are a lot of reasons that the Tsar abdicated in 1917 and not in 1905 but there are a few very key reasons. I believe that the two combined main reasons were the Tsar's actions and the war. Firstly the Tsar created most of his own problems in the first place like creating the October Manifesto, it saved him in 1905 but arguably it lost him trust when he abolished it so the people didn't trust him in 1917 and they wouldn't settle for anything like the October Manifesto. The other main points were affected by the Tsar's actions. This was the war. In 1905 the war saved the Tsar as it finished and he was able to bring his troops back to crush the opposition. Whereas in 1917 the war made some soldiers desert and therefore the soldiers joined the rebellion instead of crushing it. Also in 1917 the war made economic problems worse because there were awful conditions everywhere and a huge shortage of food. So I believe that the war and the Tsar's actions were the main reasons for the Tsar's abdication in 1917 and not in 1905, were because they were much worse in 1917 and they had a completely different effect on the army the opposition and the economic problems in 1917 than in 1905. Bibliography * Modern World History text book * My exercise book * Wikipedia * http://www.spartacus.schoolnet.co.uk/FWWtsar. ...read more.