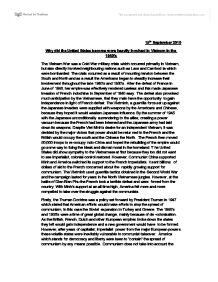 15th September 2010 Why did the United States become more heavily involved in Vietnam in the 1950's The Vietnam War was a Cold War military crisis which occurred primarily in Vietnam, but also directly involved neighbouring nations such as Laos and Cambodia which were bombarded. The crisis occurred as a result of mounting tension between the South and North and as a result the Americans began to steadily increase their involvement throughout the late 1940's and 1950's. After the defeat of France in June of 1940, her empire was effectively rendered useless and this made Japanese invasion of French Indochina in September of 1940 easy. The defeat also provoked much anticipation by the Vietnamese, that they main have the opportunity to gain independence in light of French defeat. ...read more.

However, Communist China supported Minh and America switched its support to the French imperialists. It sent billions of dollars of aid to the French concerned about the rapidly growing support for communism. The Vietminh used guerrilla tactics obtained in the Second World War and the campaign lasted for years in the North Vietnamese jungles. However, at the battle of Dien Bien Phu the French took a terrible defeat and were forced from the country. With Minh's support at an all time high, America felt more and more compelled to take over the struggle against the communists. Firstly, the Truman Doctrine was a policy set forward by President Truman in 1947 which stated that American efforts would make efforts to stop the spread of communism, in this case the Soviet expansion in Turkey and Greece. ...read more.

The containment policy, which said that if part of a country, in this case North Vietnam, fell to communism, then they had the responsibility to help stop the rest of the country falling to the same fate. Moreover, the Domino Theory stated that if this country was allowed to be communist, other neighbouring nations (in this case Laos, Cambodia and even Thailand) were potentially as risk of being taken over. The theory also worked the other way, through American intervention they could indirectly attack communism in China, where they could then mount a campaign. Furthermore, with South Vietnam weak and without essential help and support it became ever more likely that America would have to step up its involvement in order to deal with the ever-growing unpopularity of Diem's South Vietnam establishment. In addition, the actions of pro-communist and other nationalist and religious groups, aligned against Diem's regime, were initiating an effective gurilla campaign against the government. ...read more.