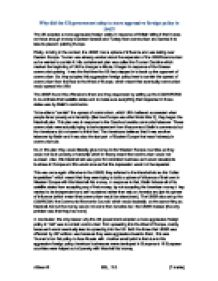 Why did the US government adopt a more aggressive foreign policy in 1947?

The US adopted a more aggressive foreign policy in response of Britain telling it that it does not have enough money to protect Greece and Turkey from communism and wanted it to take its place in policing Europe. Firstly, to bring in the context, the USSR had a sphere of influence and was taking over Eastern Europe. Truman was already worried about the expansion of the USSR/communism so he wanted to contain it. His containment plan was called the Truman Doctrine which marked the beginning of USA's changed attitude; it began in response of the Greece communist uprising. It was the first time the US had stepped in to back up the opponent of communism. ...read more.

This plan was in response to the Czechoslovakia communist takeover. These communists were actually trying to be independent from Moscow and Stalin's commands but the Americans did not seem to think that. The Americans believed that it was another takeover by Stalin and it was also the last part of Eastern Europe that wasn't already in communist rule. So, in this plan they would literally give money to the Western Europe countries so they would not be in poverty or hardship which in theory meant that communism would not succeed. Also, this Marshall aid was good for American business as it would develop its business in Europe and this would ensure that the depression would not be repeated. ...read more.