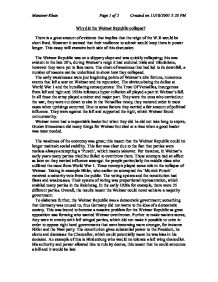 Why did the Weimar Republic collapse

Why did the Weimar Republic collapse? There is a great amount of evidence that implies that the reign of the W.R would be short lived. However it seemed that their resilience to submit would keep them in power longer. This essay will examine both side of this discussion. The Weimar Republic was on a slippery slope and was quickly collapsing; this was evident in the late 20's, during Weimar's reign it had endured trials and tribulations, however they were yet to face more. The chain of weakness that had led to its downfall, a number of reasons can be underlined to show how they collapsed. The early weaknesses were just beginning points of Weimar's dire fortune, numerous events that left a scar on Weimar and its reputation. The obvious being the defeat at World War 1 and the humiliating consequences: The Treat Of Versailles, insurgences from left and right and 1924s infamous hyper-inflation all played a part in Weimar's fall. ...read more.

These concepts played some role in the collapse of Weimar. Taking in example Hitler, who earlier on attempted the 'Munich Putsch' received a minority vote from the public. The voting system and the constitution had flaws and weaknesses. Their system of voting was proportional representation, which enabled many parties in the Reichstag. In the early 1930s for example, there were 35 different parties. Overall, the results meant the Weimar could never achieve a majority government. To elaborate further, the Weimar Republic was a democratic government; something that Germany was unused to, thus Germany did not warm to the idea of a democratic society. This was bound to become a massive problem for the Weimar Republic as great opposition was forming who wanted Weimar overthrown. Further to make matters worse, they were in enmity with left winged parties, which did not make it possible to unite in order to oppose right hand governments that were becoming more stronger, for instance Hitler and the Nazi party. ...read more.

When the Nazi's influence became higher and they were being strengthened, it meant that Weimar had to be cautious as this was a increasingly popular group making them a fatal enemy. The methods which they used were cleverly thought out, Hitler leading with excellent leadership, a great propaganda method and backed by rich and influential people who provided the with the steps to success. Von Papen was their main backer; together with Hitler they were a 'fatal combination' that spelled Weimar's destruction. In conclusion it is quite clear that the negative points are great in Weimar's case. Their decline started following the First World War, which could not be erased from global history nor from Weimar's reputation. It is true the stood firm but at the end the devastation that the combined causes of political, economical and psychological had caused Weimar's downfall. Nothing could have prevented Weimar's fate as the odds were stacked high against them. Nazis were gaining power, the Wall Street Crash had left Germany's economy shattered, their collapse was inevitable. ?? ?? ?? ?? Mansoor Khan Page 1 of 2 Created on 11/10/2005 15:28 ...read more.