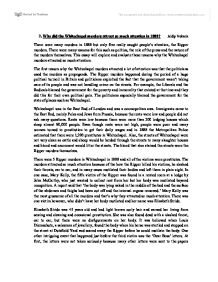 2. Why did the Whitechapel murders attract so much attention in 1888? Jaidip Vekaria There were many murders in 1888 but only five really caught people's attention, the Ripper murders. There were many reasons for this such as politics, the role of the press and the nature of the murders themselves. This essay will explore and evaluate these reasons why the Whitechapel murders attracted so much attention. The first reason why the Whitechapel murders attracted a lot of attention was that the politicians used the murders as propaganda. The Ripper murders happened during the period of a huge political turmoil in Britain and politicians exploited the fact that the government wasn't taking care of its people and was not handling crime on the streets. For example, the Liberals and the Radicals blamed the government for the poverty and immorality that existed at the time and they did this for their own political gain. The politicians especially blamed the government for the state of places such as Whitechapel. ...read more.

A report said that 'the body was lying naked in the middle of the bed and the surface of the abdomen and thighs had been cut off and the internal organs removed.' Mary Kelly was the most gruesome of all the murders and that's why they attracted so much attention. There was one victim however, who didn't have her body mutilated and her name was Elizabeth Stride. Elizabeth Stride was 45 years old and had light brown curly hair and earned her living from sewing and cleaning and occasional prostitution. She was also found dead with a slashed throat, ear to ear, but there were no disfigurements on her body. It was believed when Louis Diemschutz, a salesman of jewellery, found the body when his horse was startled and stopped on the street at Dutsfield Yard and scared away the Ripper before he could mutilate the body. One other intriguing event that happened just before the third victim was the 'Dear Boss' letters. At first, the letters were not taken seriously because many other letters were sent to the papers claiming to be the notorious serial killer ...read more.

Since a large proportion of the population could read and write because of The Education Act of 1870 which made it basic schooling compulsory for all, more people were interested in the murders and this increased the number of eager readers who wanted to read about exciting stories. The Ripper murders were a marvellous opportunity for newspapers to exaggerate and change stories of the murders so that their papers would sell and they were responsible for creating many myths around the Ripper such as the 'bogey man'. To conclude, there were several important reasons why the Whitechapel murders attracted so much attention such as human nature, the role of the press and the murders themselves. The role of the press was the most important reason because the events were reported around the world and gripped the imagination of people and they wanted to know what was going on in this small are of London. The role of the press is also more important than the politics because the politics only happened in England whereas the press were publicising the murders worldwide. ...read more.