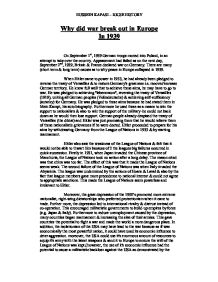 Why did war break out in Europe In 1939 On September 1st, 1939 German troops moved into Poland, in an attempt to take over the country. Appeasement had failed as on the next day, September 2nd, 1939, Britain & France declared war on Germany. There are many (short term & long term) causes as to why peace in Europe collapsed in 1939. When Hitler came to power in 1933, he had already been pledged to reverse the treaty of Versailles & to restore Germany's greatness i.e. recover/increase German territory. He knew full well that to achieve these aims, he may have to go to war. He was pledged to achieving ''lebensraum'', reversing the treaty of Versailles (1919), uniting all German peoples (Volksdeutsche) & achieving self-sufficiency (autarky) for Germany. He was pledged to these aims because he had stated them in Mein Kampt, his auto biography. Furthermore he used these as a means to win the support to nationalists & also to win the support of the military-he could not back down as he would then lose support. German people already despised the treaty of Versailles (the diktat) ...read more.

Further more, the depression led to international rivalry & distrust instead of co-operation. This encouraged militaristic governments to build-up empires by force (e.g. Japan & Italy). Furthermore to reduce unemployment caused by the depression, many countries began rearmament & increasing the size of their armies. This gave countries the potential to fight a war and made the world a more dangerous place. In addition, the isolationism of the USA may have lead to the war because as if was economically the most powerful nation, it could have used its economic influence to deter aggression. moreover, the USA could use it's enormous amount of resources to equip it's army with the latest weapons & send it to Europe to ensure the will of the League of Nations was kept.(however, the use of it's economic influence had the potential to cause a militaristic backlosn against the USA as demonstrated by the Japanese assault on Pearl Harbour.) If the USA had done the above, aggression would most probably have been deterred. In 1936, Hitler began his policy of reclaiming lost German land and uniting all German speakers in a 'greater Germany'. ...read more.

The pact was signed by the USSR because it gave them extra territory e.g. Baltic States. Furthermore, it would allow them to get ready for war, i.e. allow the time to re-arm, to an extent that could challenge the Germans. When Hitler invaded Poland, war broke out in Europe because Britain & France had promised to fight Germany if Germany invaded Poland. Hitler invaded Poland because firstly, he felt that the British & French would oppose him again. Secondly, Hitler may have felt confident enough to fight the British & French, as he now had taken-over. Also, he was by then in possession of the Skoda arms factory, the best weapons factory in Europe at the time. In conclusion, it can be said that although it was Hitler's actions which lead to war, other factors, most notably, the policy of appeasement & the 'isolationism' of the USA. If appeasement had not occurred, Hitler would not have had the confidence to take-over land in Eastern Europe. If Hitler had been prevented from taking the Rhineland, he may not have gone onto takeover Poland. It can be said that Hitler only exploited the situation in his favor, and one gamble too many by him lead to the war. HUSSEIN KAPASI - IGCSE HISTORY ...read more.