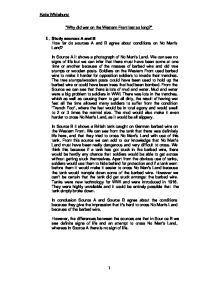 &quot;Why did war on the Western Front last so long?&quot;

"Why did war on the Western Front last so long?" 1. Study sources A and B How far do sources A and B agree about conditions on No Man's Land? In Source A it shows a photograph of No Man's Land. We can see no signs of life but we can infer that there must have been some at one time or another because of the masses of barbed wire and old tree stumps or wooden posts. Soldiers on the Western Front used barbed wire to make it harder for opposition soldiers to invade their trenches. The tree stumps/wooden posts could have been used to hold up the barbed wire or could have been trees that had been bombed. From the Source we can see that there is lots of mud and water. Mud and water were a big problem to soldiers in WWI. There was lots in the trenches, which as well as causing them to get all dirty, the result of having wet feet all the time allowed many soldiers to suffer from the condition 'Trench Foot', where the feet would be in total agony and would swell to 2 or 3 times the normal size. The mud would also make it even harder to cross No Man's Land, as it would be all slippery. In Source B it shows a British tank caught on German barbed wire on the Western Front. We can see from the tank that there was definitely life here, and that they tried to cross No Man's Land with use of this tank. From this source we can add to our knowledge that No Man's Land must have been really dangerous and very difficult to cross. We think this because if a tank has got stuck in the barbed wire, there would be hardly any chance that soldiers would be able to get across without getting stuck themselves. ...read more.

In source H, it shows a picture of a British trench on the Western Front. We can see a number of soldiers but none of them are looking out at Germans trenches or guarding. None of them are holding any sort of artillery. The men all seem to be doing daily chores. One soldier is making repairs to the trench, while another is cleaning and another is eating. In theory, soldiers were meant to get quite a lot of food for their daily rations, but in reality, this never happened. As the war went on, the amount of rations became less and less. It was very unlikely for a soldier of the front line to receive a hot meal. The bulk of British soldiers' diets came from tinned corned beef (known as bully beef), tea, bread and biscuits. Food would often take up to eight days to reach the front line trenches, and so the bread and biscuits were inevitably stale. Source H shows a typical trench, constructed from sandbags, wooden supports and containing a dugout - where the soldiers' sleep. On the floor we can see mud, which caused the condition 'Trench Foot'. In this source we don't know where on the Western Front these soldiers are, or who the soldier's are. We don't know what they've been through, an we can only infer what life is really like for them. This source is very realistic, and because it is a real photograph it must have been like this. However, this source may not be reliable. This photograph may have been staged to show that life was better than it actually was. In conclusion, I think the Source G contains more information but it is not as reliable because it is made up, whereas Source H is a photograph from an actual trench on the Western Front and is therefore more accurate. The artist of Source G could very easily manipulate the truth in the cartoon and nobody would know because the British people only found out about the war through cartoons like this. ...read more.

However, as well as stopping enemy soldiers, it also stopped their own from getting through. They would try and knock down the barbed wire first with explosives, to create holes in it, and later on in the war they'd use tanks. Tanks were new technology for WWI and were introduced in 1916. They were highly unreliable and it could be entirely possible that the tank simply broke down. We can see in Source B that one has got stuck in barbed wire. The use of gas was also new to WWI. Although poisonous gases were known about along time before WWI, no one had ever used them because they were hard to control and nobody knew much about them. But in WWI gas was used for the first time in a war. France first used tear-gas grenades against the Germans. In 1915 German had the first use of chlorine gas, which was very nasty and worked by destroying the breathing organs of the victim and slowly led them to die by suffocation. After this, Allied troops used urine soaked cotton pads as masks because the urine neutralised the poison. In July 1915 soldiers were given gas masks, but these were hard to breath in. Both sides then used phosgene gas because it was more effective that chlorine gas and only little amounts were needed to kill a soldier. Germany then used Mustard gas in September 1917; this was the most deadly gas of all of them. It was also hard to detect as it was almost odourless and was even more fatal because it stayed poisonous in the soil for weeks after. We can see the effects of gas through a man who saw it in Source J and figures about British deaths relating to gas in Source I. Another new thing in WWI was the machine gun. It had never been used before, and it claimed a lot of lives. I think technology made the war longer because it was responsible for killing a lot of soldiers, who would have otherwise lived. Katie Whitehurst 1 ...read more.