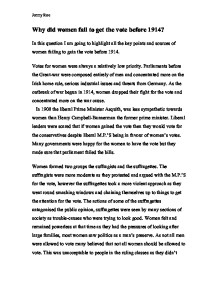 Why did women fail to get the vote before 1914?

Why did women fail to get the vote before 1914? In this question I am going to highlight all the key points and sources of women failing to gain the vote before 1914. Votes for women were always a relatively low priority. Parliaments before the Great-war were composed entirely of men and concentrated more on the Irish home rule, serious industrial issues and threats from Germany. As the outbreak of war begun in 1914, women dropped their fight for the vote and concentrated more on the war cause. In 1908 the liberal Prime Minister Asquith, was less sympathetic towards women than Henry Campbell-Bannerman the former prime minister. Liberal leaders were scared that if women gained the vote then they would vote for the conservatives despite liberal M.P.'S being in favour of women's votes. Many governments were happy for the women to have the vote but they made sure that parliament failed the bills. Women formed two groups the suffragists and the suffragettes. ...read more.

Women with jobs would usually only receive half the pay a man would receive with the same job. Girls went to school, it would be in a school where they learned domestic services, and could then go to university if they wished. There was a major change as women could vote in local elections and could become councillors however, women could not become M.P.'S or vote in national elections. In 1908 suffragettes started direct action, this was because the women's suffrage bills had ran out of time this intensified the suffragette campaign and became more vocal. One suffragette, Edith New chained herself to the railings of Downing Street as she made a speech and was arrested for it. Other suffragettes threw stones at 10 Downing Street. There was logic behind the actions of the suffragettes. They believed that the women's suffrage was not an important issue to the government, this is why the suffragettes were getting arrested and sent to prison as it hit the headlines this made it hard for the government to ignore them. ...read more.

Many spectators thought she had committed suicide. Her funeral was attended by thousands of suffragettes that believed she sacrificed her life for their cause. Suffragettes tried to raise their profile by increasing the violence but they damaged their own cause by giving the government a reason to reject women's suffrage. M.P.'S believed if they gave in to the violence then they would stand no chance with the protest of the Irish home rule or the doctors and mineworkers rioting for higher wages. As war broke out in 1914 suffragists and suffragettes gave up their campaign and concentrated on the war cause as they had the men's jobs to think about. From the information I have read women were not taken seriously and men were in complete control. I believe if direct action was not used and the suffragist did it their way then they would not have gotten anywhere with the campaign of women's suffrage. The war also helped the women to show how capable they actually were by doing the male jobs, this helped them gain some respect for themselves, this would also help there campaign later on. ?? ?? ?? ?? Jonny Roe ...read more.