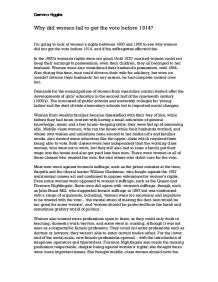 Why did women fail to get the vote before 1914?

Why did women fail to get the vote before 1914? I'm going to look at women's rights between 1800 and 1900 to see why women did not get the vote before 1914, and if the suffragettes affected this. In the 1800's women's rights were not good. Until 1870 married women could not keep their earnings to possessions, even their children, they all belonged to her husband. Women were also considered their husband's possession, until 1884. Also during this time, men could divorce their wife for adultery, but women couldn't divorce their husbands' tor any reason, he had complete control over her. Demands for the emancipations of women from masculine control started after the developments of girls' education in the second half of the nineteenth century (1800's). The increased of public schools and university colleges for 'young ladies' and the start of state elementary schools led to important social changes. Women from wealthy families became dissatisfied with their way of like, while before they had been content with having a small education of general knowledge, music and a few house-keeping skills, they were fed up of remaining idle. Middle-class women, who ran the house while their husbands worked, and whose own wishes and ambitions came second to her husband's and families needs, also wanted some education like the upper-class which required them being able to vote. ...read more.

Emily Davies and others were trying to improve women's education opportunities. As women were becoming more independent, they wanted equal legal and political rights, especially over property owning. Eventually parliament took action, in 1870 to allow women to keep their earnings and in 1882 they gave women the right to own and dispose of property. In 1897, local groups working towards women's suffrage joined together to form the National Union of Women's Suffrage Societies (NUWSS). They used peaceful, patient methods of petitioning for their rights. Some women were losing confidence in the effectiveness of the suffragist's peaceful methods. They thought men were tricking them, because if the '......are as good as they ask us to be then we don't cause them any trouble and there is no reason for them to take any notice of us.' Four members of the Independent Labour Party (who believed that women shouldn't have equal voting rights until all men could vote), disagreed with their party, Mrs Emmeline Pankhurst and her daughters, Christabel, Sylvia and Adela. They founded the Women's' Social and Political Union (WSPU) in 1903, they planned to win publicity by militant action, Christabel started this at a public meeting where the Foreign Secretary was speaking, A cotton-mill hand, Annie Kenney, went with her, together they shouted suffrage slogans, they spat at the police officers that tried to remove them. ...read more.

Apart from the fact that men may have been generally against giving the vote to women the biggest problem the suffragists or suffragettes had was getting either of the two major parties to support them The Conservative leadership believed that they could do something for the women and that as only wealthy ladies would probably obtain the vote, these would vote conservative - like their husbands. But with the party generally against radical change their supporters were against. The Liberals were the women's best hope but despite much liberal support women had as little success there because the Liberal leadership - like Asquith was dead against them. In conclusion, men generally were against women's suffrage, with a few exceptions. Likewise women were mostly for suffrage, with some exceptions. However many factors were involved in women failing to get the vote before 1914, such as what political party was in power, and if the MP's who were for women getting the vote were backbench MP's or leaders, and if the suffragettes violent methods hindered women's efforts, In my opinion they may have helped publicise women wanting the vote, but may have made people doubtful that they should have the vote. ?? ?? ?? ?? Gemma Higgins ...read more.