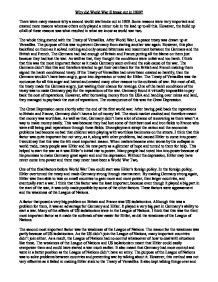 Why did World War II break out in 1939? There were many reasons why a second world war broke out in 1939. Some reasons were very important and created more reasons whereas others only played a minor role in the lead up to all this. However, the build up of all of these reasons was what resulted in what we know as world war two. The whole thing started with the Treaty of Versailles. After World War I, a peace treaty was drawn up at Versailles. The purpose of this was to prevent Germany from starting another war again. However, this plan backfired on them as it solved nothing and only caused bitterness and resentment between the Germans and the British and French. The Germans had had enough of Britain and France putting all the blame on them just because they had lost the war. As well as that, they thought the conditions were unfair and too harsh. I think that this was the most important factor as it made Germany seem evil and the sole cause of the war. The Germans didn't like this and therefore wanted to get their own back for the British and French making them signed the harsh conditioned treaty. ...read more.

This helped to start the war as it was Hitler's initial rise to power. Many people had voted him into power because of his promises to make Germany great again and end the depression. Without the depression, Hitler may have never come into power and there may never have been a World War Two. One of the final factors before World War Two could start was Hitler's foreign policy. In the foreign policy, Hitler overturned the treaty and made Germany strong through rearmament. By making Germany strong again, Hitler was then able to take on small countries to gain more and more power, then larger countries, and eventually start a war. I think that this factor was the least important, because even though it played a big part in the start of the war, it was only made possible by some of the other factors. These factors were appeasement and the weakness of the League of Nations. A factor that posed a very big problem on Britain and France was US isolationism. Although this was a problem for them, it was an advantage for Germany and Hitler. It played a very big part in Germany's ability to start a war. ...read more.

The appeasement in fact encouraged war. It made Hitler think that no-one dare to stop him. This encouraged him to go further and further, until in the end he went too far. The appeasement of Sudetenland led Stalin to make the Nazi-Soviet Pact, because he believed he could not trust Britain. The Nazi-Soviet Pact was a factor that made Hitler powerful and gave him the ability to start a war. Due to appeasement form Britain and France, Hitler was able to create a pact with the USSR. I think that this factor was quite important as it gave Hitler the reassurance that he had enough power to attack Poland. However, I don't think that this is hugely important in relationship to the other factors. Therefore I would say that it is the seventh most important factor. Overall, I think that World War Two broke out in 1939 because the Germans had finally built a powerful enough army and hatred for Britain and France. I think that the weakness of the League of Nations and the Treaty of Versailles were the root causes of the outbreak of war as all or most of the other factors stem off those two. In conclusion, I think that war broke out because of the overall weakness of Britain and France, as they allowed Hitler to go too far. ...read more.