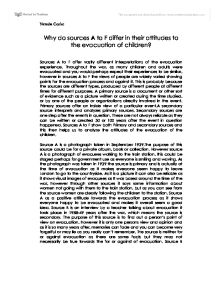 Why do sources A to F differ in their attitudes to the evacuation of children?

Why do sources A to F differ in their attitudes to the evacuation of children? Sources A to F offer vastly different interpretations of the evacuation experience. Throughout the war, as many children and adults were evacuated and you would perhaps expect their experiences to be similar, however in sources A to F the views of people are widely varied showing points for the evacuation process and against it. This is probably because the sources are different types, produced by different people at different times for different purposes. A primary source is a document or other sort of evidence such as a picture written or created during the time studied, or by one of the people or organizations directly involved in the event. Primary sources offer an inside view of a particular event.A secondary source interprets and analyzes primary sources. Secondary sources are one step after the events in question. These are not always reliable as they can be written or created 50 or 100 years after the event in question happened. Sources A to F show both Primary and secondary sources and this then helps us to analyze the attitudes of the evacuation of the children. ...read more.

Sources C and F are very different as one is a novel and one is a film. They also hint that experiences differed according to class. The source is neither for nor against evacuation as they have already been evacuated and it talks about experiences. Source c's attitude towards evacuation is much more neutral as it is neither for nor against and it has different views on experiences-novels are for entertainment purposes so you would expect their attitudes to be different to somewhat more biased views with sources. Source D is an appeal for people to provide homes for evacuee children, it is for evacuation as it wants people to help out during the war and do "their" part. The purpose of the source is to persuade people to help out, however, it is biased as and one sided as it is white propaganda to encourage families to take evacuees in, so obviously it is going to be for evacuation and only one sided. The poster has two children on it smiling to encourage the family's better nature and warm hearts by letting them into their homes. Using such phrases like "You may be saving a child's life", appeals to people's better natures as well. ...read more.

Source F's attitude towards evacuation is what some may call undecided as it has lots of different emotions and interpretations of the war to make it neither for nor against at points. Overall Source A to F's attitudes towards evacuation is widely varied in their interpretations of the war and the evacuation process. There are many for and against sources and even some neutral ones. Some of the sources attitudes showed that they thought evacuation was a good idea as they knew their children would be safe and they would be able to live a happy life after the war, However some other sources showed the negativeness that was lurking at the time of the war, many people wanted their children to stay with them and actually risk their children's lives, We know that some of the sources are primary and some are secondary. All of the sources I have just spoken about differ in their attitudes as the sources are made for different people at different times for different purposes, however the sources no matter how much they differ from pictures, interviews and films to appeals and novels they may not always be reliable in what they tell us and therefore giving us a false assumption of the attitude at the time of evacuation. ?? ?? ?? ?? Natasha Cooke ...read more.