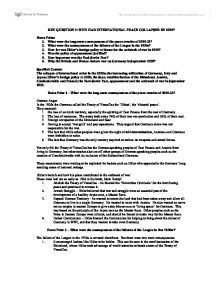 WHY HAD INTERNATIONAL PEACE COLLAPSED BY 1939?

KEY QUESTION 3: WHY HAD INTERNATIONAL PEACE COLLAPSED BY 1939? Focus Points 1. What were the long-term consequences of the peace treaties of 1919-23? 2. What were the consequences of the failures of the League in the 1930s? 3. How far was Hitler's foreign policy to blame for the outbreak of war in 1939? 4. Was the policy of appeasement justified? 5. How important was the Nazi-Soviet Pact? 6. Why did Britain and France declare war on Germany in September 1939? Specified Content The collapse of international order in the 1930s; the increasing militarism of Germany, Italy and Japan; Hitler's foreign policy to 1939; the Saar, remilitarization of the Rhineland, Austria, Czechoslovakia and Poland; the Nazi-Soviet Pact, appeasement and the outbreak of war in September 1939. Focus Point 1 - What were the long-term consequences of the peace treaties of 1919-23? German Anger In the 1920s the Germans called the Treaty of Versailles the 'Diktat', the 'dictated peace'. They resented: 1 the loss of so much territory, especially the splitting of East Prussia from the rest of Germany. 2 The loss of resources. The treaty took away 74% of their iron ore production and 26% of their coal. 3 Foreign occupation of the Rhineland and Saar 4 Having to accept 'war guilt' and pay reparations. ...read more.

Clearest example of appeasement, and of how it had failed. See below 1939, Nazi Soviet Pact Surprise agreement between the USSR and Germany not to attack each other. See below. Opened way to invasion of Poland 1939, Invasion of Poland Britain and France declare war on Germany. WWII begins. Focus Point 4 - Was the policy of appeasement justified? What was appeasement? A policy which aimed to prevent aggressors from starting wars by finding out what they really wanted and then agreeing to those demands which seemed reasonable. Followed by Britain and France for most of the 1930s when neither was willing to risk another war with an aggressive power. Britain and appeasement Most politicians thought it was in Britain's interest to avoid becoming entangled in Europe's affairs again. Most British people supported the policy of appeasement. Winston Churchill was one of the few politicians to speak out against it. Arguments For Appeasement 1. The Empire was more important than Europe. The Japanese threatened to attack British colonies in the Far East. Britain could not afford also to fight Germany in the West. 2. British armed forces were not sufficiently large to fight another major war. Britain needed time to rearm. 3. To fight a successful war against Germany, Britain needed the support of the USA and Dominions such as Australia. But they wanted to stay out of European affairs. ...read more.

1. Stalin: a) realised France and Britain were not serious about military talks b) could not face Germany alone c) could not manage to fight in Europe as well as Japan on the Manchurian border d) wanted to take land in Poland 2. Hitler needed a deal. The deadline for invading Poland was close. Neither trusted the other, but it was convenient for the moment. Focus Point 6 - Why did Britain and France declare war on Germany in September 1939? Simply put Britain and France declared war on Germany on 3 September to honour its guarantee to defend Poland, following its invasion by Hitler. Hitler had believed that as before, Britain and France would not got to war over some distant land, but he miscalculated. On a more complex level war is declared because of a number of factors: 1. How the resentment over the Treaty of Versailles led to the beliefs and plans of Hitler that would lead to aggression. 2. How the failure of the League to stop aggression and uphold the treaty encouraged Hitler and others to be more aggressive. And how the weakness of the League encouraged Britain and France to follow an alternative policy in appeasement. 3. How Hitler in particular gradually undid the terms of the treaty in his foreign policy. 4. How Britain and France's policy of appeasement encouraged Hitler to be bolder, how they undermined the League. 5. How others such as Stalin contributed to bringing war closer. ...read more.