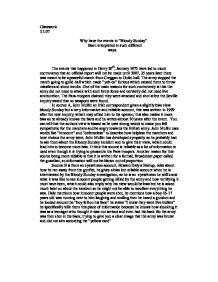 Why has bloody sunday been represented in such different ways?

Why have the events in “Bloody Sunday”

Been interpreted in such different

The events that happened in Derry 30th, January 1972 have led to much controversy that an official report will not be made until 2007, 35 years later there was meant to be a peaceful march from Creggan to Guild-hall. The army stopped the march going to guild-hall which made “yob-os” furious which caused them to throw missiles and shout insults. One of the main reasons for such controversy is that the army did not need to attack with such brute force and certainly did not need live ammunition. The Para-troopers claimed they were attacked and shot at but the Seville inquiry stated that no weapons were found.

In source A, John Mullin an Irish correspondent gives a slightly bias view bloody Sunday but a very informative and reliable account, this was written in 1999 after the new inquiry, which may of led him to his opinion, this also makes it more bias as he already knows the facts and he writes almost 20 years after the event.  You can tell that the authors view is biased as he uses strong words to make you fell sympathetic for the marchers and be angry towards the British army. John Mullin uses words like “innocent” and “defenseless” to describe how helpless the marchers and how vicious the army were. John Mullin has developed sympathy as he probably had to ask them about the Bloody Sunday incident and to give their view, which could lead him to become more bias. I think this source is reliable as a lot of information is used even though it is trying to prosecute the Para-troopers. Another reason for this source being more reliable is that it is written for a formal, Broadsheet paper called the guardian, so information will not be blown out of proportion.

Source B is from an eyewitness account, Edward Daly a Bishop, talks about how he ran away from the gunfire, he gives a bias but reliable account when he is interviewed by the Bloody Sunday investigation, as he is an  eyewitness he will know what it was like to see innocent people getting killed by the army and how terrifying it must have been, which could also imply why his view would be bias but he is asked much later on about the incident so he might not be able to recollect everything he saw. Daly mentions how innocent people were shot, he mentions how a boy 16-17 years old was running next to him laughing and smiling then he heard a gunshot and he looked around the “boy fell on his face” he states “I knew they were live bullets” he specifically tells them this piece of information because he knows how shocking it was as a teenager who thought it was not serious and even had his back t6o the army was then shot in the back, trying to give you a clear image that the army was brutal and did not aim according the “yellow card”

Source C is a news interview on ITN, 1972. Wilford is the officer of the 1st Battalion of Parachute regiment the interview says almost entirely the opposite to the other two sources. Wilford claims that the Gunmen where hit, but his excuse for not being able to find any weapons is that they must have been hidden by comrades. Even more controversial is that Wilford says that excessive force was used because they were being shot at. According to Wilford the Shooting were from the flats, but later knowledge proved, that the victims all died on the ground, proving the controversy because the people who were murdered were not in flats but helpless marchers trying to escape. This source would be the least reliable and by far the most bias, because Wilford has to make it seem that the people died were gunmen, and that the reason for using live ammunition was to protect themselves or him and the whole British Army would be frowned upon and in serious trouble. What led me to this view were his terrible excuses and inaccurate information, he uses terrible excuses like “we came under fire from flats the flats and petrol bombs” and inaccurate information such as “3 gunmen were hit, but no weapons were found”.

There are several reasons to such different interpretations as the incident would leave one side with terrible consequences, troops could be sent out of Ireland but if the Irish are found guilty for shootings and bombings, like Wilford claims, a lot of conflict would reside in Ireland once again. The correspondent would be the most reliable of the three, as his account would be the least bias as he knows the whole story of the previous conflicts and what troops had to put up with, but he would also know the families and feel sympathy towards them, but unlike the other two he does not need to give a bias report, he only needs to inform, this would give his account, source A, more reliability.