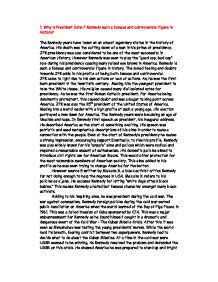 Why is President John F Kennedy such a famous and controversial figure in history?

1. Why is President John F Kennedy such a famous and controversial figure in history? The Kennedy years have taken on an almost legendary status in the history of America. His death was the cutting down of a man in his prime of presidency. JFK presidency was also considered to be one of the most successful in American History. However Kennedy was seen to play the "good cop, bad cop" role during his presidency causing many raised eye brows in America. Kennedy is such a famous and controversial figure in history. The mixed feeling and doubts towards JFK adds to his profile of being both famous and controversial. JFK came to light due to his own actions or lack of actions. As, he was the first born president in the twentieth century. Making him the youngest president to take the White House. His religion caused many disillusioned votes for presidency. As he was the first Roman Catholic president. For America being dominantly protestant, this caused doubt and was a major talking point across America. JFK was also the 35th president of the United States of America. Making him a world leader with a high profile at such a young age. His election portrayed a new dawn for America. The Kennedy years were becoming an age of idealism and hope. In Kennedy first speech as president, his inaugural address. He described America as the start of something exciting. His speech was patriotic and used metaphorical descriptions of his aims in order to make a connection with the people. Even at the start of Kennedy's presidency he makes a strong impression, encouraging support. Eventually, to rise his profile. Kennedy was also widely known for his "unsafe" aims and polices which were radical and required a remarkable amount of euthanasiam. His domestic policies aimed to introduce civil rights law for American Blacks. This would offer protection for the most vulnerable members of American society. ...read more.

Source P is visual source. It is a video paying tribute to Kennedy by his official photographer, Jaques Lowe. Kennedy is represented in the video as a smiling, happy man and a devoted family man. Portrayed Kennedy as an international statesman as well as a man for all generations, a man to which the public could relate with. JFK was also seen as a great public speaker, as he spoke German and was always sympathetic. The Kennedy era was referred to as a Camelot - the perfect era. The video was a celebration of the life of Kennedy in an emotional positive way. Kennedy was a "Shining Star" he was admired, captivated, and charismatic and had strong movie star links. JFK was seen as patron, as the background music was lively suggesting his personality as free-spirited. I personally think that source P is not completely reliable representation of Kennedy. As the author, was a friend of the president, he had reason to be biased and show Kennedy in all his glory. The video is very a one sided account of Kennedy. It only shows Kennedy in a patriotic light making the source a very unbalanced as it is very opinionated. Therefore this source isn't a fully reliable representation of Kennedy. It was directed by a friend, so it is obviously going to represent Kennedy in a heron view. It will be most opinionated with very few facts. The director is also going to be extremely biased towards Kennedy making this source untrustworthy and an unreliable representation of Kennedy. It was made in reaction to the growth of criticism towards Kennedy. Some historians in the 1980s had written work criticising Kennedy, calling him a womaniser and humiliating and questioning his rein as president because of his strong links with the Mafia. The video was a reply to the critics; it was to straighten out the bended road. ...read more.

Source J interrupts Kennedy as being clumsy towards his foreign policy. Source J is written by Richard Perle in 1963. Perle was a foreign policy adviser to Eisenhower. Perle was a republican, opposition to Kennedy who was a democratic. Since he is Kennedy political opponent he has reason to be critical. Perle describes Kennedy's foreign policies, accusing him of not being skilful enough or cunning to get them through the congress. He also compares him to the republican candidate for president, Nixon. This is not fully valid interruption of Kennedy. As Perle is Kennedy opposition the source doesn't give a balanced account of Kennedy. It doesn't tell of Kennedy's successes. The source lacks substance and is in the position to comment on Kennedy foreign policies. As he was an adviser to a former American president. Perle also talks about Nixons Faults. Critising both candidates. Comparing the source with source M, there is a clear difference. Source Q entitled "the Dark side of Camelot." From the title it suggests the source is going to be a critical view of Kennedy. It is written by Seymour Hersh, who is seen as a revionist - revises traditional interpretations of history. He is critical of Kennedy's personal life with his extra marital affairs. He also passes judgement on a democratic president giving permission to assassinate the Cuban leader. Explaining this is not the behaviour of democratic country. Hersh challenged the mist, accepted interruption of Kennedy i.e. the family man. The purpose of this source, he is trying to sell a book. He is willing to question the mysteries. He was to also increase his personal profile as a writer. Is this source valid? No, it s unbalanced, extremely opinionated. It focuses majority on two objective points for Kennedy. His sex affairs and Kennedy giving permission for assassination. Hersh uses dramatic language to draw reader to get involved in Kennedy's' faults. This is not a measured representation of Kennedy. On comparing this with source M, it completely contradicts what is said. ...read more.