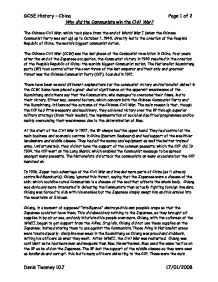 Why the CCP won the civil war

Chiang, with the outbreak of the WWII, began to get support from the Allies. Stupidly, Chiang did not use these supplies on the Japanese; instead storing them to use against the Communists. Those living in Nationalist areas were treated poorly: discipline was weak in the Koumintang as Chiang was proud and stubborn, letting his officers do what they want. After WWII, the Civil War was restarted. Chiang was confident as he had more men and weapons than Mao. Nevertheless, Mao used the same tactics on the KP as he did on the Japanese. The KP lost the support of the middle classes as they were seen as landlords and corrupt: this led to many officers defecting to the CCP. These were the main weaknesses of the Nationalists and ultimately led to their defeat. Chiang then fled to Formosa with a lot of gold and a core of advisors. The Communists however, overcame their weaknesses, allowing them to be victorious over the KP. They walked for over 1000 km and lost 80% of their men; but still they walked. ...read more.

It was he instructed his men to be kind to the peasants and fight the way they did. It was he who persevered against both his enemies and fought against condemnation from the wider world. It was HE who over came his weaknesses by gaining equipment and support in the ways mentioned above. This in turn is likely to have led to his victory over the Nationalists. Chiang on the other hand did not overcome his weakness. He let discipline fail and treated people badly. Therefore, he lost support and men (via. defection) to the CCP. This in turn, probably, caused him to lose the war and flee to Formosa. So in conclusion, it was the leadership which decided who won the civil war. It was the great leadership of Mao that made him enforce strict rules on his men; leading to his popular support. He could then stay with peasants, enabling him to ambush his enemies. Chiang, on the other hand, did not enforce discipline and so many people dislike him; including his soldiers, with many defecting. Leadership is why the Communists won the Civil War. ?? ?? ?? ?? GCSE History - China Page 1 of 2 Denis Twomey 10J 17/01/2008 ...read more.