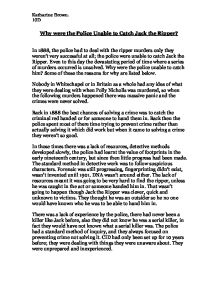 Why the police were unable to catch Jack the ripper.

Why were the Police Unable to Catch Jack the Ripper? In 1888, the police had to deal with the ripper murders only they weren't very successful at all; the police were unable to catch Jack the Ripper. Even to this day the devastating period of time where a series of murders occurred is unsolved. Why were the police unable to catch him? Some of these the reasons for why are listed below. Nobody in Whitechapel or in Britain as a whole had any idea of what they were dealing with when Polly Nicholls was murdered, so when the following murders happened there was massive panic and the crimes were never solved. Back in 1888 the best chances of solving a crime was to catch the criminal red handed or for someone to hand them in. Back then the police spent most of there time trying to prevent crime rather than actually solving it which did work but when it came to solving a crime they weren't so good. ...read more.

On the fourth murder the dead woman's apron was found, but also a clue was left, it seemed the murderer had written it, it had had been written on the floor saying 'The Juwes are the men that will not be blamed for nothing.' However before the words could be photographed, the commissioner of the Metropolitan Police Force ordered them to get rid of it. It was thought to cause 'onslaught upon Jews' the police didn't want this. Any clues they did have they didn't know what to do with them, and others weren't photographed, so the police couldn't do further investigations into the clue because the clue were wiped away. They never photographed the crime scenes either so any clues that may have been missed were picked up on later because there was nothing there for them to work with. That was another reason Jack the Ripper was never caught. Another clue was found, it was Catherine Eddowes apron, it was found covered in blood, being inexperienced with clues and the inexperience of the CID. ...read more.

There were many things that added to the fact that the ripper was never caught like: hoax letters, there being no reward, inexperience from the police's side. The ripper was also very clever, he had an advantage, because of the locations he did the crimes in and also he worked quickly. There are many more. In conclusion all these points are important as to why the ripper was never caught. I think the main reason for why he was never caught was the police, they were inexperienced and didn't have a clue about what they dealing with at the time. It was a standard method of policing and technology wasn't like it was today, the things we use like forensic, DNA and fingerprinting to use to solve a mystery like this one. I also think there being a limited amount of clues, what clues they did have were swiped away so they were unable to search into them more. All the other aspects that I've talked about added to Jack the Ripper never being caught, but overall I think with the inexperience of the police and the small amounts of resources were the main problems. Katharine Brown. 10D ...read more.