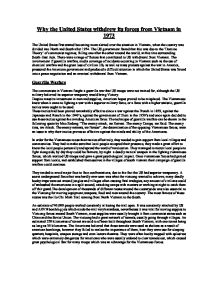 Why the United States withdrew its troops from Vietnam in 1973

Why the United States withdrew its forces from Vietnam in 1973 The United States first started becoming more alerted over the situation in Vietnam, when the country was divided into North and South after 1954. The US government feared that this was due to the 'Domino Theory' of communist regimes, falling one after the other around the world, at this time surrounding South-East Asia. There were a range of factors that contributed to US withdrawal from Vietnam. The involvement if guerrilla warfare, media coverage of incidents occurring in Vietnam such as the use of chemical warfare and the great loss of civilian life, as well as mass protests against the war in America, pressured the American government and produced a difficult situation in which the United States was forced into a peace negotiation and an eventual withdrawal from Vietnam. Guerrilla Warfare The communists in Vietnam fought a guerrilla war that US troops were not trained for, although the US military believed its superior weaponry would bring Victory. Despite massive investment in men and supplies, American hopes proved to be misplaced. The Vietnamese knew when it came to fighting a war with a superior military force, or a force with a higher statistic, guerrilla tactics were ought to be used. These tactics had been proved remarkably effective since a war against the French in 1859, against the Japanese and French in the 1940's, against the government of Diem in the 1950's and once again decided to use these tactics against the invading American force. ...read more.

The fact that troops could be deployed quickly and stealthily to nearby villages gave the VC very little time to organise themeselves and as a reult were sometimes caught off guard. Once a village was secured it was searched for any other presence of VC activity eg. weapons stash, tunnels, if there was any evidence of VC activity the whole village would be destroyed, usually burnt to the ground. The changing nature of warfare by the US caused many uproars, the use of Agent Organe and Napalm which were both the most commonly used chemical weapons were dangerous and effective however most of the time many civilians were injured terribly rather than the VC. The US used these weapons originally to clear out sections of jungles where they knew the VC were hiding. Agent Orange was first used in 1962 as part of Operation Ranch Hand, in roughly ten years 86 million litres were dropped on 20 % of South Vietnam. Alot of vegetation and Trees were destroyed, and the air, rivers and soil were polluted. It was effective in terms of destroying natural cover for the VC however did little to change the way the war was being fought . Napalm, a jellied petroleum, was first used in Operation Rolling Thunder in 1965. Napam is highly flammable and was used to stick to peoples skin and burn,it was used to attack large areas of the North and demolish enemy positions around the South. ...read more.

There were incidents however that turned out to be too dangerous for example at Kent State University on may 1970, where a large demonstration was held with about 1500 to 300 students. However protests were now against the law, and in result the nation guards were sent in. The demonstration ended in disaster when four students were shot dead and nine were wounded. It became clear frorm the evidence that the students were not part of the demonstration, events such as these pressured the government to consider withdrawing US troops. One of the four dead students at Kent State University. The Vietnam war was closely documented by newsreels and pictures, which showed american citizens the true horror of what was going on within this country. Battles and Massacres were recorded such as the My Lai massacre in 1968, where pictures of dead civilians outraged and disgusted many people who were against the war. Many belived that the war could not be won if events such as these would carry on, the fact there was so much media coverage of the war, helped to turn peoples views around, including demonstrators in other countries, for example: demonstrations that were held in London. Many famous figures, also helped people change views on the war, such as Martin Luther King who made a speech against the war, Mohammad Ali's refusal to conscription and Martha Gellhorn's coverage of the war. The protest movements and media coverage during the vietnam war, helped a great deal to the eventual withdrawal in 1973, media coverage led to a huge amount of protests and demonstrations which eventually pressured the american government to consider withdrawing troops. The Peace Process ...read more.