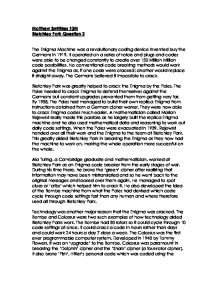 Why was bletchley park able to break the Enigma code?

Matthew Smithies 10M Bletchley Park Question 2 The Enigma Machine was a revolutionary coding device invented buy the Germans in 1919. It operated on a series of rotors and plugs and codes were able to be changed constantly to create over 150 Million Million code possibilities. No conventional code breaking methods would work against the Enigma as, if one code were cracked; another would replace it straight away. The Germans believed it impossible to crack. Bletchley Park was greatly helped to crack the Enigma by the Poles. The Poles needed to crack Enigma to defend themselves against the Germans but constant upgrades prevented them from getting very far. By 1938, The Poles had managed to build their own replica Enigma from instructions obtained from a German cipher worker. They were now able to crack Enigma codes much easier. ...read more.

Technology was another major reason that the Enigma was cracked. The Bombe and Colossus were two such examples of how technology aided Bletchley Parks work. The Bombe had 30 rotors so it could cycle through 10 code settings at once. It could crack a code in hours rather than days and could work 24 hours a day 7 days a week. The Colossus was the first ever programmable computer system. Developed in 1943 by Tommy Flowers, it was an 'upgrade' to the Bombe. Colossus was paramount in breaking the 'Dolphin' cipher and the 'Shark' cipher (a four-rotor cipher). It also broke 'Fish', Hitler's personal code which was coded using the Lorenz code. John Herivel was a Cambridge Maths graduate and code breaker at Bletchley Park. He broke the German Army's 'Red' cipher using his imagination and logic and working out that German code operators were not changing their code setting regularly. ...read more.

All of the above reasons are linked. For example, the Poles and Rejewski are linked with the work if Alan Turing because without their help and ideas, Turing might never have developed the Bombe from Rejewski's original idea. Another link is between Turing and the development of technology at Bletchley Park. Turing 's Bombe opened up possibilities for technology no one had ever thought of, allowing machines like Colossus to be built. John Herivel and German mistakes are also linked because if the Germans had made sure their code settings were changed regularly and they had not become lazy, Herivel would never have been able to guess they were doing so. Bletchley Park was able to break the Enigma because of all these reasons, but I believe the most important reason is the work of the Poles and Rejewski. Without them, Bletchley Park would never have had a replica Enigma or even have been able to think of building a machine such as the Bombe. ...read more.