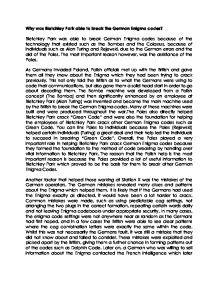 22 November 1941 after a tip of by Enigma Intelligence, the Royal Navy sinks the German supply ship 'Atlantis' as it meets up with some U-Boats. Another Ambush 9 day later will cause the Germans to ask if the Enigma had been compromised. The Governments put the French and Polish cryptographers under top security as they want to keep the fact they had cracked into the Enigma, as this would make the Germans change the code. On 8-9 November 1942 the Polish cryptographers were evacuated from the code breaking centre after the invasion of North Africa as a German invasion of southern France is certain. On 12th of February 1943 Gustave Bertrand received a message form Antoni Palluth, who was one of the engineers that worked on the replica enigma machine, stating that he had been arrested by the Germans. Also on the 17th of February Rudolphe Lemoine, the French spymaster who knows about Hans Thilo Schmidt and the Enigma manuals, is arrested by the Germans in the south of France. On the 3rd of June 1944 Paul Paille , the French Counter Intelligence chief, Reads Bertrands report on how he escaped from the Germans and is asked by Sir Stewart Mezies, the head of British Secret Intelligence service, to interrogate Bertrand to discover if he told the Germans that the Allies had broken the enigma code because then he could also have told them about the Allied invasion, But it was concluded that Bertrand hadn't told the Germans anything, Bertrand is detained for a few day until the Allied invasion just in case. Why was Bletchley park able to break the German enigma? Bletchley Park was able to break German Enigma codes because of the technology that was developed such as Bombes and the Colossus, also because of individuals such as Alan Turing and Dilly Knox, and mistakes made by the Germans. As Germany invaded Poland, Polish officials met up with the British and gave them all they knew about the Enigma. ...read more.

The operator would enter the code into the machine and then it would cycle through all the possible combinations, stopping when it reached the correct one. The final version, invented by Turing, could decipher the code, possible wheel locations and possible plug locations thousands of times faster than a human. This greatly helped the British with the speed of cracking codes and sending them off to those who needed them. However it did not decrease the difficulty of knowing what formulas to use within the machine in the first place, or even decoding the initial and forming calculated guesses to feed into the machine to start off with. Those working at Bletchley had to solve several things in order to gather the information needed to have a chance at cracking the code. These included: ? The Cog order and wiring ? The text settings ? The Cross plugging ? And language (including German military slang terms) This required great patience and dedication - all skills that those working at Bletchley either had already, or managed to acquire. "Cracking a code can be an incredibly frustrating experience" said one worker, "but in most cases the results are uplifting, rewarding [and] very satisfying". Through intertwining many different people into a close knit community, along with their skills, personalities and unique ideas, Bletchley Park managed to effectively the ultimate code-cracking machine. Finally, breakthroughs were also a key factor when it came to breaking the code. Strokes of luck such as recovering German navy code books off small weather vessels that were easily captured, or getting other such Nazi secrets of sinking U-boats or crashed vehicles greatly helped advance the enigma effort. Overall, there was no key reason why the British were able to crack the code of the enigma. No huge mistake was made by the Germans that completely gave the secrets away, no massive breakthrough was made by the British to unlock all the enigma codes in one go, the end result came from many different factors that when put together, gave Bletchley Park the key to the enigma code. ...read more.