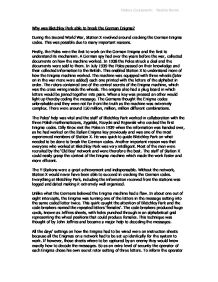 Why was Bletchley Park able to break the German Enigma Codes?

Why was Bletchley Park able to break the German Enigma? During the Second World War, Station X revolved around cracking the German Enigma codes. This was possible due to many important reasons. Firstly, the Poles were the first to work on the German Enigma and the first to understand its mechanism. A German spy had over the years before the war, collected documents on how the machine worked. In 1938 the Poles struck a deal and the documents were sold to them. In July 1939 the Poles passed on their knowledge and their collected information to the British. This enabled Station X to understand more of how the Enigma machine worked. The machine was equipped with three wheels (later on in the war more were added) each one printed with the letters of the alphabet in order. ...read more.

Another important reason was that everyone who worked at Bletchley Park was very intelligent. Most of the men were recruited by the 'Old Boy' network and were therefore the best. The staff of Station X could easily grasp the context of the Enigma machine which made the work faster and more efficient. The Y-Stations were a great achievement and indispensable. Without the network, Station X would never have been able to succeed in cracking the German codes. Everything at Bletchley Park, including the information received from the stations was logged and dated making it extremely well organized. Unlike what the Germans believed the Enigma machine had a flaw. In about one out of eight intercepts, the Enigma was turning one of the letters in the message setting into the same coded letter twice. This quirk caught the attention of Bletchley Park and the code breakers named the repeated letters 'females'. ...read more.

To make the rotor code clear, the operators were told to repeat the code twice. This gave a clue to the code breakers of Bletchley Park in 1940 and gave a better idea of how the Enigma was set up. A gigantic step forward in the breaking of German codes was when the British finally managed to capture an Enigma machine in May 1941 along with all the code books and operating manuals. By the end of June nearly all of the Naval Enigma codes were being read. Furthermore, the Bombe created by Alan Turing enabled the code breakers to decipher the codes more easily and a lot faster. Located in Hut 11 the Bombe was very essential in the matter of breaking the German Naval codes. Finally, Bletchley Park was able to break the German Enigma, because the code breakers all possessed an enormous amount of motivation. All of their energy was put into their work and they were happily willing to stay for longer shifts to carry on with their work. ...read more.