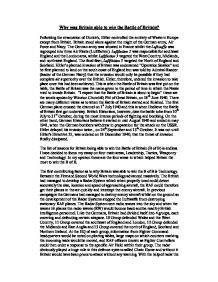 Why was Britain able to win the Battle of Britain?

Why was Britain able to win the Battle of Britain? Following the evacuation of Dunkirk, Hitler controlled the entirety of Western Europe except from Britain. Britain stood alone against the might of the German army, Air Force and Navy. The German army was situated in France whilst the Luftwaffe was regrouped into three Air Fleets (Luftflotten). Luftflotten 2 was responsible for southeast England and the London area, whilst Luftflotten 3 targeted the West Country, Midlands, and northwest England. The final fleet, Luftflotten 5 targeted the North of England and Scotland. Hitler's planned invasion of Britain was codenamed "Operation Sealion" and he first planned to land on the south coast of England but was told by Admiral Raeder (leader of the German Navy) that the invasion would only be possible if they had complete air superiority over the British. Hitler, therefore, ordered the invasion to take place once this had been achieved. This is when the Battle of Britain was first put on the table, the Battle of Britain was the name given to the period of time in which the Nazis tried to invade Britain. "I expect that the Battle of Britain is about to begin" these are the words spoken by Winston Churchill; PM of Great Britain, on 18th June 1940. ...read more.

Goring first mistake was made after the 5th August, Luftwaffe 5 was hit badly after they were fed false information. Following that day, Goring decided that Luffwaffe 5 should not appear as much in the B of B. This had a huge effect on the Germans as the North of England could only be bombed heavily by Luftwaffe 5. Goring next mistake was withdawing the Germans best precision bomber, the Ju 87 Stuka. Goring did this because a lot of the bombers were lost in one raid and he had once flown them in WW1. He was personally attached and this mistake was vital as they were very by far the German best bomber and was very effective in the B of B. In previous campaigns the Luftwaffe played a supporting role for the German army; just like it had been designed to do, whilst using Blitzkreig tactics. This tactic successfully overcame most of Europe, including Poland and France, but this time the Luftwaffe would have operate alone as a weapon in itself. This was something that it was not suited for, as it lacked the strategic bombers and long-range fighters that would be needed to overcome the RAF. Tactics, therefore, played a huge role in the B of B. Hitler and Goring changed the German tactics several times during 1940, the first tactic that the Germans employed was trying to draw out the RAF fighters by bombing the Navy ships and coastal convoys. ...read more.

The Big Wing was a British tactic was involved meeting incoming Luftwaffe bombing raids in strength with a wing-sized formation of three to five squadrons. On 11th September 1940 Hitler postponed Operation Sealion until 24th September. RAF Bomber Command contributed to the problems facing the German naval forces by sinking eighty barges in the Port of Ostend alone. On 15 September 1940 two massive waves of German attacks were decisively repulsed by the RAF. The total casualties on this critical day were 60 German aircraft shot down versus only 26 RAF, roughly 2:1 in favour of the RAF. The German defeat caused Hitler to order, two days later, the postponement of preparations for the invasion of Britain. Henceforth, in the face of mounting losses in men, aircraft and the lack of adequate replacements, the Luftwaffe switched from daylight to night-time bombing. On 13 October 1940, Hitler again postponed the invasion until the spring of 1941. It was not until Hitler's Directive 21, was ordered on 18 December 1940, that the threat of invasion finally vanished. Weaponry evolved massively between the two World war, both the Germans and British had produced planes which were more advanced and ultimately better than those of WW1. Never before in WW2 had the Germans faced an Air Force anywhere near the quality of the RAF. The Germans main planes were the Messerschmitt Bf 109E and Bf 110, and The Junkers Ju 87. The British mainly used the Spitfire Mk I and the Hurricane Mk I. ...read more.