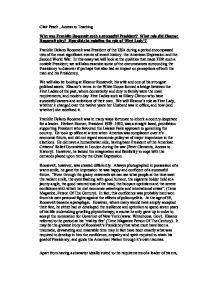 Why was Franklin Roosevelt such a successful President? What role did Eleanor Roosevelt play? How did she redefine the role of 'First Lady'?

Clair Peach , Access to Teaching Why was Franklin Roosevelt such a successful President? What role did Eleanor Roosevelt play? How did she redefine the role of 'First Lady'? Franklin Delano Roosevelt was President of the USA during a period encompassed two of the most significant events of recent history- the American Depression and the Second World War. In this essay we will look at the qualities that made FDR such a notable President; we will also examine some of the circumstances surrounding the Presidency to discover if perhaps that also had an impact on perceptions of both the man and his Presidency. We will also be looking at Eleanor Roosevelt, his wife and one of his strongest political assets. Eleanor's terms in the White House formed a bridge between the First Ladies of the past, where domesticity and duty to family were the main requirements, and modern day First Ladies such as Hilary Clinton who have successful careers and ambitions of their own. We will Eleanor's role as First Lady, whether it changed over the twelve years her Husband was in office, and how (and whether) she redefined it. Franklin Delano Roosevelt was in many ways fortunate to inherit a country desperate for a leader. Herbert Hoover, President 1929 -1932, was a straight laced, prohibition supporting President who favoured the Laissez Faire approach to governing the country. ...read more.

In modern times Presidents spend vast amounts on media consultants and press relations; Roosevelt seems able to have had an innate aptitude for this. As well as being a natural leader, imbued with both charm and self belief, Roosevelt was fortunate to have been in the right place at the right time. When Roosevelt campaigned for Presidency, there were doubts whether capitalism and democracy could survive the Depression; Stalinism in the USSR and the rise of the Nazi party in Germany show evidence for this concern. Theologian Reinhold Niebuhr was particularly concerned with the 'threat' from the Communist party: 'Capitalism is dying.. Let no-one delude himself by hoping for reform within'. (Time Magazine 100). In fact, by combining to some extent the national control of a dictator with philanthropy, humanitarianism and a belief in Democracy, Roosevelt maintained the 'American Way'. As well as having the right personality and the right situation for such a successful career, Roosevelt had one major asset- his Wife. Eleanor Roosevelt was the fifth cousin of Franklin, orphaned at ten and educated at a progressive French school, where she spent time performing social work. She married in 1905 and had six children, although the third sadly died aged about seven months. At this time, Eleanor's life revolved around her Husband- first supporting his legal studies, then his political career- and dealing with his Mother Sara, who exerted much control over the family. ...read more.

He was the great leader, oozing charisma and confidence: she was the humanitarian support act, making sure the marginalized were considered, and managing to see the statistics of poverty as individual people in need of help. He gave her the power to change lives; she gave him the credibility to seem great. However, we must not forget that both Eleanor and Franklin owed a debt to the fortunate era of their existence. Franklin happened to be politically mobile when a charming leader was required; Eleanor happened to be present at the dawn of both American feminism and racial tolerance, and to be a humanitarian at a time of great need. Had they been born at an earlier time in history, their particular brand of politics may have been viewed very differently indeed. To conclude, if I had to choose one word to sum up the root cause of Eleanor and Franklin's success, I would choose 'confidence'. Franklin managed to propose radical measures and deal with failures because he believed in himself. America may indeed have been saved by the War, but Franklin had the confidence to halt the escalating Depression, if not reverse it. As for Eleanor, as she said, 'the future belongs to those who believe in the beauty of their dream' (Womenshistory.about.com). ...read more.