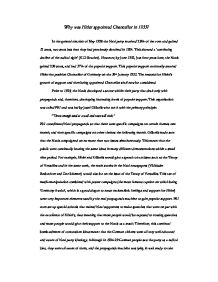 Why was Hitler appointed Chancellor in 1933?

Why was Hitler appointed Chancellor in 1933? In the general election of May 1928 the Nazi party received 2.8% of the vote and gained 12 seats, two seats less than they had previously obtained in 1924. This showed a 'continuing decline of the radical right' (K.D Bracher). However, by June 1932, just four years later, the Nazis gained 230 seats, and had 37% of the popular support. This popular support eventually secured Hitler the position Chancellor of Germany on the 30th January 1933. The reasons for Hitler's growth of support and then being appointed Chancellor shall now be considered. Prior to 1929, the Nazis developed a sector within their party that dealt only with propaganda and, therefore, developing increasing levels of popular support. This organisation was called P01 and was led by Josef G�bells who ran it with the primary principle: "Throw enough mud at a wall and some will stick." P01 coordinated Nazi propaganda so that there were specific campaigns on certain themes one month, and then specific campaigns on other themes the following month. G�bells made sure that the Nazis campaigned on no more than two issues simultaneously. This meant that the public were continually hearing the same ideas in many different demonstrations within a small time period. For example, Hitler and G�bells would give a speech on an issue such as the Treaty of Versailles and in the same week, the main stories in the Nazi newspapers (V�lkisder Beabechter and Der St�rmer) would also be on the issue of the Treaty of Versailles. This use of media manipulation combined with poster campaigns (the most famous caption on which being 'Germany Awake', which is a good slogan to rouse nationalistic feelings and support for Hitler) were very important elements used by the nazi propaganda machine to gain popular support. P01 even set up special schools that trained Nazi supporters to make speeches that were on par with the excellence of Hitler's, thus meaning that more people would be exposed to rousing speeches and more people would give their support to the Nazis as a result. ...read more.

of people who gave the highest percentage of support to the Nazis- this is a correlation between the effects of depression and Nazi support. This shows that the economic depression radicalised the mittlestand on the largest scale as they were the most desperate segment of society, and this supports the idea that the economic situation was the enabling factor in Hitler gaining the support required for him to rise to power in 1933. Without the economic depression, the Germans would never have been attracted to Hitler's inert policies. Although propaganda and policies were important, it can be argued that Hitler needed some issue to capitalize on and the economic depression provided this sound opportunity to highlight the Weimar inadequacy and gain popular support. However, without the propaganda and Nazi organisations developed before 1929, the public would not have been aware of the Nazis to the same degree so they may have voted communist instead, or the upper and middle class may not have turned to the Nazis after Bruning's budget if the SA hadn't created such an anti-communist image. Therefore, the conclusion is that the propaganda machine and pre-1929 party changes eventually created the increase in support for the Nazis in the period of 1929-32 which gave Hitler the necessary political leverage with which he was able to be involved in power-broking. Another idea in why Hitler became Chancellor in 1933 is that of the government inadequacy. The Weimar Government was relatively new and had not built up party identification with voters, so it was easy for them to lose support as the voters were more likely to be volatile. The economic depression brought about this opportunity for the Weimar Republic to lose support, and they did, and a government with no support is unable to rule effectively. Failure to compromise within the Muller Government in 1930 brought about the collapse of the Grand Coalition as KD Bracher states "To be sure, the transition from parliamentary democracy to one-party state began with the overthrow ...read more.

Hitler's manipulation of the Reichstag later proved this wrong, and hence it was essentially the mistake of the intriguing leaders of Germany for appointing Hitler Chancellor. Hitler, having previously demanded that any government he form consist mainly of Nazis in certain positions, surprisingly accepted von Papen's proposals on forming a government to which the Nazi party looked severely disadvantaged. This was a clever political move from Hitler because if he had demanded more, he may have lost his chance at being chancellor, and as the party's funds were very low after all the election campaigns, and as the party's support was low, Hitler may never have had another chance at power. His willingness to form a coaltion government as a last resort saved the Nazi party, and the unwillingless of the socialists and communists to from one, destroyed democracy. Therefore, from this information, one can conclude that it was not popular support that led to Hitler being appointed Chancellor in 1933, but political intrigue. Although all the other issues were important in gaining popular support so that Hitler would be considered for Chancellor in the first place, without clever political manipulation and compromise from both Hitler and von Papen, the Nazis would never have come into power because their popularity was on the decline. The reason Hitler came into power in 1933 was because von Papen and Hindenburg were ignorant in thinking Hitler could be controlled, and because of Hitler's willingness to compromise along with von Papen's craving to get back into power to annoy Schleicher. Another important reason in addition to this is the Muller Government's inadequacy of being unable to compromise and sort out the economic depression, because if they had there would not have been several Chancellors with no support ruling by decree, all of whom contributed to the need for a strong leader like Hitler. The inadequacy opened way for Hitler to manipulate himself to power. Therefore, in conclusion, political intrigue is why Hitler was appointed Chancellor in 1933, because if it had been on popular support, Hitler would have been in power in 1932. ...read more.