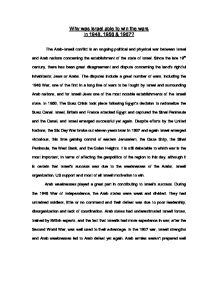 Why was Israel able to win the wars in 1948, 1956 & 1967? The Arab-Israeli conflict is an ongoing political and physical war between Israel and Arab nations concerning the establishment of the state of Israel. Since the late 19th century, there has been great disagreement and dispute concerning the land's rightful inhabitants; Jews or Arabs. The disputes include a great number of wars, including the 1948 War, one of the first in a long line of wars to be fought by Israel and surrounding Arab nations, and for Israeli Jews one of the most notable establishments of the Israeli state. In 1956, The Suez Crisis took place following Egypt's decision to nationalize the Suez Canal. Israel, Britain and France attacked Egypt and captured the Sinai Peninsula and the Canal, and Israel emerged successful yet again. Despite efforts by the United Nations, the Six Day War broke out eleven years later in 1967 and again Israel emerged victorious, this time gaining control of eastern Jerusalem, the Gaza Strip, the Sinai Peninsula, the West Bank, and the Golan Heights. ...read more.

The fact that their forces were trained by British experts, more experienced after the Second World War and that military service was now compulsory was a definite advantage. The Israelis planned attacks in 1956 to strengthen their position and with foreign support from Britain and France and with their swift and coordinated troops; they captured the Sinai Peninsula without trouble. Using surprise shock tactics during the Six Day War in 1957, the Israelis were able to destroy Egyptian air forces, and therefore push them back and occupy the Gaza Strip, the Sinai Peninsula and the West Bank. In the north of Israel, the Syrians were also defeated and the Israelis now also had control of the Golan Heights, the West Bank and most importantly, eastern Jerusalem. Without a doubt Israel was successful because they were organized, disciplined and had help from foreign powers such as Britain, France, and the United States. Help from foreign super-powers, such as the United States, contributed largely to Israel's victory, as well as the fact that Israelis were constantly prepared for war and more and more Jews from different parts of the world migrated to Israel to help. ...read more.

Defeat by Egypt during the Suez Crisis and 1948 War of Independence would have incontestably changed geopolitics of the region, as they would not have gained control of geographically significant places such as eastern Jerusalem, the Gaza Strip, the Sinai Peninsula, the West Bank, and the Golan Heights. On the whole, the fact that determined Israel's existence was the motivation of its troops, which therefore lead Israel to its victory in the wars in 1948, 1956 and 1967. Overall, a lot of significant components have played a part in Israel's success throughout the years, including being dependant on the weaknesses of their enemies. Help from foreign superpowers also affected the outcome of the wars immensely, with training from the British, support from the French and supplies from the United States, the Israelis had a definite advantage over the Palestinian Arabs. In general, it was the motivation of the troops themselves that resulted in Israel's success; the motivation to fight for their religion, to fight for their people and to fight for a home. ?? ?? ?? ?? ...read more.