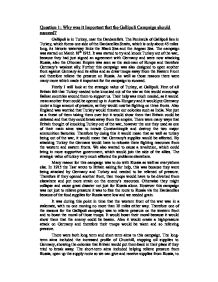 Why was it Important that the Gallipoli Campaign should succeed?

Question 1: Why was it Important that the Gallipoli Campaign should succeed? Gallipoli is in Turkey, near the Dardanelle's. The Peninsula of Gallipoli lies in Turkey, which forms one side of the Dardanelles Straits, which is only about 45 miles long, its historic waterway links the Black Sea and the Aegean Sea. The campaign was started on March 18th 1915. It was started to try and knock Turkey out of the war, because they had just signed an agreement with Germany and were now attacking Russia, also the Ottoman Empire was seen as the sick-man of Europe and therefore Germany's weakest ally. Further this campaign was also designed to open another front against Germany and its allies and so draw troops away from the Eastern Front and therefore relieve the pressure on Russia. As well as those reasons there were many more which made it important for the campaign to succeed. Firstly I will look at the strategic value of Turkey, at Gallipoli. First of all Britain felt that Turkey needed to be knocked out of the war as this would encourage Balkan countries around them to support us. Their help was much needed, as it would mean another front could be opened up in Austria-Hungary and it would put Germany under a huge amount of pressure, as they would now be fighting on three fronts. Also England was worried that Turkey would threaten our colonies such as India. Not just as a threat of them taking them over but it would show them that Britain could be defeated and that they could break away from the empire. There were many ways that Britain thought of knocking Turkey out of the war, however the one they used as one of their main aims was to invade Constantinople and destroy the two major ammunition factories. Therefore by doing this it would mean that as well as turkey being out of the war, it would mean that Germany's supplies would be affected. ...read more.

Also these sources show a good interpretation of the Australian soldier's feelings towards war and because we know from the Anzac book that this bushman idea of a casual, layed back, devil may care attitude to their situation is accurately depicted in the grin of the soldier who is smoking heavily. Question 3: Is there sufficient evidence in sources A to F to explain why the Gallipoli campaign failed? Use all the sources and own knowledge from your studies to help you explain your answer. The campaign failed because the plan was too ambitious and it lacked organisation. An example of the poor organisation is that there wasn't any co-operation between the naval and the armed forces, therefore the campaign would start in confusion and chaos. However in this answer I'm not just explaining why the campaign failed I'm analysing the sources to see whether there is enough evidence to show why the campaign failed. If we look at source A we can see that it's a cartoon of two Anzac soldiers, drawn by an Australian artist in 1916. The evidence that agrees with the reasons why the campaign failed are that the soldiers were ill-equipped, disorganised, battered, lack of hope, ordinary men (working class), and heroic. The source shows that the soldiers are heroic as they are still smiling even though there seems to be no hope of the campaign ever succeeding. The source shows that the soldiers were disorganised and ill-equipped because it shows them wearing battered uniform. This gives the impression of them being ill-equipped because the soldiers were only sent with a summer uniform and as the battle continued into the winter the soldiers became ill and many died from hypothermia, this because the Turkish winters are freezing cold. Also the source shows that the men didn't have adequate medical supplies as the men look battered and they have cuts and bruises on them. ...read more.

Also there was total lack of support from home, the air forces could have helped prevent the failure however they didn't even bother to support the attack. The British Government minister, Lloyd George, wrote this source he was writing this before the campaign took place. However there reason why this information was over looked might be because the resources evadible to the government at the time were very limited. As they only had an old tourist information booklet on turkey to create this campaign from. Therefore I conclude that overall using all the sources there is enough evidence. However each source separately doesn't have enough information to back up the reason for the failure of the campaign. Each source covers only certain factors of the failures so therefore there isn't enough evidence if that source is used alone. The missing factors in the sources include the terrible conditions of the soldiers in the trenches. The soldiers were kept in terrible conditions and after staying in these conditions for weeks they were just sent out to fight. The trenches over in Gallipoli were even worse than those on the western front. There was little water and the water was contained in empty food tins and this then spread dysentery throughout the troops. Also in the summer the heat and dust was dreadful and the rotting bodies smelled terrible and were causing some sickness and there had to be a days truce were the troops from either side would help clear no mans land. As well as these terrible conditions there were the terrible illness that infected the troops. These included gunshot wounds, gangrene, de-hydration, respiratory problems, fly plaques (open wounds attack flies but in some cases this helped the men as the maggots ate dead tissue, which otherwise might have become gangrenous). So overall there is enough evidence when the sources are used together, but not if each source is used alone as they are missing other vital factors to why the campaign failed. ...read more.