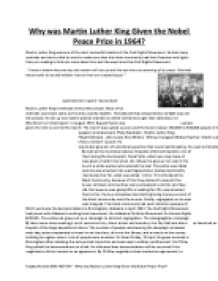 Why was Martin Luther King given the Nobel Peace Prize?

﻿Why was Martin Luther King Given the Nobel Peace Prize in 1964? Martin Luther King was one of the most successful leaders of the Civil Rights Movement. He had many methods and tactics that he used to make sure that the black community had their freedom and rights. Carry on reading to find out more about him and the way he led the Civil Rights Movement. ?I have a dream that one day this nation will rise up and live out the true meaning of its creed: ?We hold these truths to be self-evident: that all men are created equal.?? Quote from MLK?s speech ?I have a dream? Martin Luther King?s methods were pretty simple. Most of his methods used were same as the ones used by Gandhi. He believed that using violence to fight was not the answer. He set up non-violent protest marches in white territories to get their attention, for example ?The March on Washington? in August 1963. ...read more.

All black communities were persuaded to do this and they did. But anyone seen giving lifts or waiting for lifts, was arrested. Due to this, the bus companies had starting losing money as most of the black community used the busses. Finally, segregation on busses was dropped. The black community had won! Another example of MLK?s work was the demonstrations in Birmingham, Alabama in April 1963. The Civil Rights Movement had joined with Alabama?s existing local movement, the Alabama Christian Movement for Human Rights (ACMHR). The enhanced group set up a campaign to diminish segregation. The desegregation campaign was launched on April 3rd; there were mass meetings, lunch counter sit-ins, direct action and marches, the City Hall and also a boycott of the large department stores. The number of people volunteering the campaign increased each day; actions expanded to kneel-ins at churches, sit-ins at the library, and a march on the county building to register voters. ...read more.

members bombed Birmingham?s Sixteenth Street Baptist Church, killing four young girls. The Southern Christian Leadership Conference, or SCLC, was founded in 1957 after the bus boycott. SCLC?s first major campaign, the Crusade for Citizenship began in late 1957. The campaign objective was to register thousands of deprived voters in time for the 1958-1960 elections. The SCLC had played a big part in ?The March on Washington?. Martin Luther King had faced many problems and challenges, mainly catapulted by the KKK. He had faced imprisonment as well. Basic problems for him and the community was that the police officers or any white person in charge could have been part of the KKK, so if any situation aroused they would probably just stand there and watch them instead of helping out. After all this, MLK had a lot of achievements. He had gained equality and freedom for all the black community using non-violent procedures. Segregation had been collapsed due to him and his fellow black communists. African-Americans owe him big time! Tayaba Ahmed 9ME HISTORY Why was Martin Luther King Given the Nobel Peace Prize? ...read more.