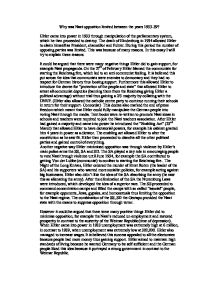 Why was Nazi opposition limited between the years 1933-39?

Why was Nazi opposition limited between the years 1933-39? Hitler came into power in 1933 through manipulation of the parliamentary system, which he then proceeded to destroy. The death of Hindenburg in 1934 allowed Hitler to claim himself as President, chancellor and Fuhrer. During this period the number of opposing parties was limited. This was because of many reasons. In this essay I will try to explain these reasons. It could be argued that there were many negative things Hitler did to gain support, for example Nazi propaganda. On the 27th of February Hitler blamed the communists for starting the Reichstag fire, which led to an anti communist feeling. It is believed this put across the idea that communists were enemies to democracy and they had no respect for German history thus loosing support. Furthermore this allowed Hitler to introduce the decree for "protection of the people and state" that allowed Hitler to arrest all communist deputies (banning them from the Reichstag giving Hitler a political advantage) ...read more.

The Night of the Long Knives, Hitler ordered the murder of Ernst Rohm (the leader of the SA) and his supporters who wanted more socialist policies, for example acting against big businesses. Hitler also didn't like the idea of the SA absorbing the army (he saw this as alienating the army). After the elimination of the SA the Nuremburg Laws were introduced, which developed the idea of a superior race. The SS proceeded to command concentration camps and filled the camps with so called "asocial" people, for example opponents, Jews, gypsies, and homosexuals thus limiting the opposition to the Nazi regime. The combination of the SS, SD the Gestapo provided the Nazi state with the means to suppress opposition through terror. However it could be argued that there were many positive things Hitler did to minimise opposition, for example the Nazi's reduced un-employment and restored prosperity in contrast to the austerity of the Weimar Republic(time of depression). When Hitler came into power in 1933 unemployment was extremely high at 6 million, in contrast to 1939, when unemployment was extremely low at 302,000. ...read more.

Another positive thing Hitler did to gain votes was to take advantage of the un-reacting governments after the war, for example Britain did not act to Hitler's plans to re-unite Germany violating the treaty of Versailles. The nation was weak economically and militarily and so did not want to commit itself to war unless it definitely had to. Hitler became popular because he then proceeded to establish a strong stable government, for example Germany re-occupied the Rhineland in 1936 which made the people feel more secure from invasion and it also provided essential raw materials for industry production/ war production thus limiting the opposition. It could be argued that Hitler gained support because he managed to overthrow reparation payments. Reparations were viewed as extremely un-fair by the German people and this would have been viewed as a success by Hitler thus gaining support. In conclusion we can say that there were many reasons for the limited opposition between the years 1933-39. I believe from the information I have obtained that the main reason was because of Hitler influencing the German people through terror, although I recognise that there were other contributing factors. ?? ?? ?? ?? ...read more.