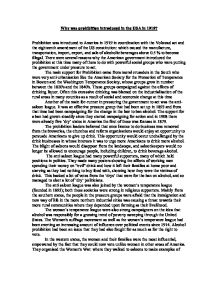 Why was prohibition introduced in the USA in 1919?

Why was prohibition introduced in the USA in 1919? Prohibition was introduced to America in 1919 in coordination with the Volstead act and the eighteenth amendment of the US constitution: which caused the manufacture, transportation, import, export, and sale of alcoholic beverages above 0.5 % to become illegal. There were several reasons why the American government introduced the prohibition at this time many of them to do with powerful social groups who were putting the government under pressure to act. The main support for Prohibition came from moral crusaders in the South who were very anti-urbanisation like the American Society for the Promotion of Temperance in Boston and the Washington Temperance Society, whose groups grew in number between the 1820's and the 1840's. These groups campaigned against the effects of drinking liquor. Often this excessive drinking was blamed on the industrialisation of the rural areas in many counties as a result of social and economic change at this time Another of the main for-runner in pressuring the government to act was the anti-saloon league. It was an effective pressure group that had been set up in 1893 and from that time had been campaigning for the change in the law to ban alcohol. ...read more.

Even more so was the worry that America was losing its status as the world's number one industrial and economical country, due the number of people taking days off that were related to drinking. This made big business men such as Rockefeller try to do something to stop all the absentees. Rockefeller was a supporter of the anti-saloon league and gave over $350,000 to their campaigns to bring about the prohibition before 1920. The influence of powerful business men such as Rockefeller put even more pressure onto politicians to act. The pressure for prohibition came at a time when it was seen as the government as responsibility to solve all social problems, such as prostitution and child labour. Prohibition was seen as another social issue because of its link with domestic violence Politicians in the south were eager to secure the votes from the people living in the large areas of rural America. They saw the idea of backing the prohibition as a way to get the votes from those in rural communities as it would appeal to their wishes. They also saw it as a way to preserve the values of America, the idea of a hardworking community who respected god and their family. ...read more.