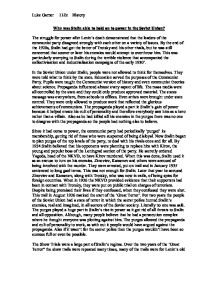 Why was Stalin able to hold on to power in the Soviet Union?

Why was Stalin able to hold on to power in the Soviet Union? The struggle for power after Lenin's death demonstrated that the leaders of the communist party disagreed strongly with each other on a variety of issues. By the end of the 1920s, Stalin had got the better of Trotsky and his other rivals, but he was still concerned that sooner or later his enemies would attempt to overthrow him. This was particularly worrying to Stalin during the terrible violence that accompanied the collectivisation and industrialisation campaigns of the early 1930'. In the Soviet Union under Stalin, people were not allowed to think for themselves. They were told what to think by the state. Education served the purposes of the Communist Party. Pupils were taught the Communist version of history and even communist theories about science. Propaganda influenced almost every aspect of life. The mass media were all controlled by the state and they could only produce approved material. The states message was everywhere, from schools to offices. Even artists were brought under state control. They were only allowed to produce work that reflected the glorious achievements of communism. ...read more.

In some cases they would tell the defendant that they had their wife and kids in the next room and were going to torture them if they did not confess. The Show Trails played a large part in his success as it made people think that Stalin was getting rid of all the bad people in the country as they all seemed to confess to the crimes. Therefore Stalin was seen as a hero and was saving the Soviet Union. Again if it wasn't for the secret police then the show trials wouldn't have worked as the people put on trial wouldn't have been caught or set up. The secret police were more formerly known as the NKVD. They were Stalin's way of crushing any political opposition. They performed execution and arrests and murders of Stalin's enemies. The NKVD used and army of informers in schools, factories and farms, even children were encouraged to inform on their parents. Those who were unwilling to confess were persuaded by torture and treats against their family. Almost all were found guilty and shot. Although, a few cheated Stalin's plans by committing suicide. ...read more.

The purges also played a big role as it eliminated all persons who were a threat to Stalin or who disagreed with his policies and therefore he was securely in power. But again like the propaganda and the cult of personality, the purges wouldn't have been possible if the secret police hadn't been there to enforce it. The show trails also played a large part in Stalin's triumph as like the propaganda and cult of personality it deceived people's views. This was because everyone was confessing to he crimes it seemed that Stalin was seeking out any people acting against society and therefore making the people feel safe. Again though like the others the show trials were only successful because of the secret police. This is because they arrested the opposition found the 'evidence' and forced them to confess. I believe that the most important reason for Stalin's success was the secret police, this is because with out them all the other reasons wouldn't have worked or been enforced and therefore with out the secret police, he may not have stayed in power for as long as he did. Luke Garner 11Zc History ...read more.