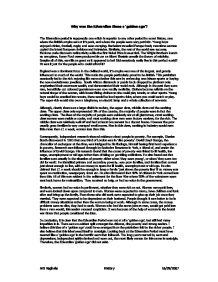 Why was the Edwardian times a 'golden age'?

Why was the Edwardian times a 'golden age'? The Edwardian period is supposedly one which is superior to any other period in recent history, one where the British empire was at it's peak, and where the people were very patriotic. Young boys enjoyed cricket, football, rugby and even camping. Bachelors travelled Europe freely meantime women copied the latest European fashions and hairstyles. Similarly, the rest of the world saw success; Madame curie discovers radioactivity while the first Nobel Prize is awarded. The Wright Brothers launch an aeroplane, Henry Ford mass produces his car as Albert Einstein unveils the theory of relativity. Despite all of this, was life as great as it appeared to be? Did everybody really live in this perfect world? Or was it just for the people who could afford it? England was a dominant force in the civilised world, it's empire was one of the largest, and greatly influenced so much of the world. ...read more.

The middle class was relatively well off and had at least one servant in a decent house. However the poor usually grew families in very cramped small rooms. Men in this class, working in industry would earn little more than �1 a week, woman less than this. Consequently, independent research showed evidence about people in poverty. For example, Charles Booth discovered in 1903 that one third of London was in 'dire poverty'. David Lloyd George, the chancellor of exchequer at the time, was intrigued by his findings, himself having first hand experience in poverty. Research was followed through by Seebohm Rowntree in York, a friend of, and under the influence of David George. His research found that the cause of poverty was linked to ill health, low wage, unemployment or old age rather than drinking or gambling addictions. He also found out that families were usually in the situation of poverty either when 'they were young', or when 'they were too old for work'. ...read more.

People thought it was better to be in difficult money situations rather than the women being at work. Although in some cases, the money problems were so dire, they had to work. Woman who had the same jobs as men, would get paid less than a man would, this sexism aroused scepticism. It was because of the help of woman in the brutal war times that people considered the idea. In conclusion, it is clear that the Edwardian Period was not at all a 'golden age', but still had many impurities in it. There was an evident split amongst the citizens, dire poverty and strong sexism. I believe this idea of a 'golden age' could have emerged from the patriotism felt by the richer people. I also believe that this label owed itself to nostalgia. Looking back at the Edwardian Period must have seemed like a 'golden age' in the horrific wars that followed. The long years marred by wars and depressions, independent spirits drained and worn out, the most likely reason for this name is nostalgia. Therefore, the Edwardian 'golden age' did not exist. Arti Vaghela History 16/09/2007 ...read more.